U.S. Intelligence And Military Officials Try To Convince The Biden Administration To Stay In Afghanistan

zekal3_3 3 weeks ago Fashion, Life & Love Comments Off on U.S. Intelligence And Military Officials Try To Convince The Biden Administration To Stay In Afghanistan 16 Views 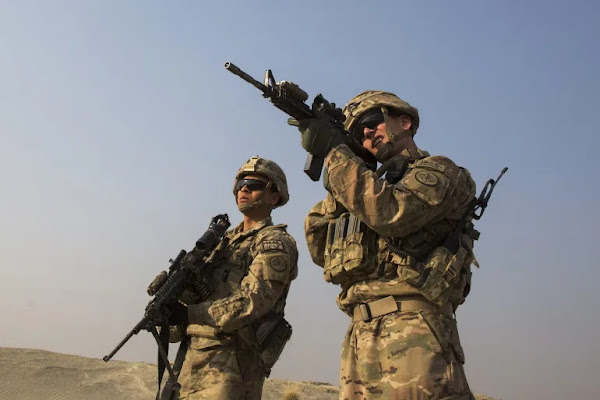 A US soldier uses the optic on his rifle to observe Afghans in the distance, near forward operating base Gamberi in Laghman province of Afghanistan [File: Lucas Jackson/Reuters]
New York Times: Officials Try to Sway Biden Using Intelligence on Potential for Taliban Takeover of Afghanistan
If U.S. troops leave before any deal between the Taliban and the Afghan government, the militant group will take over much of the country, an intelligence assessment predicted.
WASHINGTON — As President Biden signaled this week that he would let a May 1 deadline pass without withdrawing American troops from Afghanistan, some officials are using an intelligence assessment to argue for prolonging the military mission there.
American intelligence agencies have told the Biden administration that if U.S. troops leave before a power-sharing settlement is reached between the Taliban and the Afghan government, the country could fall largely under the control of the Taliban within two or three years after the withdrawal of international forces. That could potentially open the door for Al Qaeda to rebuild its strength within the country, according to American officials.
The classified assessment, first prepared last year for the Trump administration but not previously disclosed, is the latest in a series of grim predictions of Afghanistan’s future that intelligence analysts have delivered throughout the two-decade-long war.
But the intelligence has landed in a changed political environment. While President Donald J. Trump pushed for a withdrawal of all forces even before the terms of the peace deal required it, Mr. Biden has been more cautious, saying Thursday that he does not view May 1 as a deadline he must meet, although he also said he “could not picture” troops being in the country next year.
Read more ….
WNU editor: I do not think they will have to do much convincing. The Biden administration do not want to be remembered for losing Afghanistan to the Taliban. The prospect of the Taliban rolling back all the advances that women have made in Afghanistan will be enough to convince the Biden administration to not leave the country.
More News On U.S. Intelligence And Military Officials Trying To Convince The Biden Administration To Stay In Afghanistan
Top general: Afghan forces need US troops to fight Taliban — The Hill
Top U.S. General: Afghan Army Could Not Survive on Its Own — US News and World Report
Special Operations Command chief: Afghans need US troops to counter Taliban — AP
Update: The Taliban are not going to accept this …. Biden wants to explore keeping U.S. counter-terrorism troops in Afghanistan: top lawmaker (Reuters). More here …. US ‘exploring keeping’ counterterrorism troops in Afghanistan (Al Jazeera).Original Article

Previous Is It A Big Deal That President Biden Does Not Know The Afghan President’s Name?
Next Tonight’s Movie Is ‘Decision Before Dawn’ (1951)