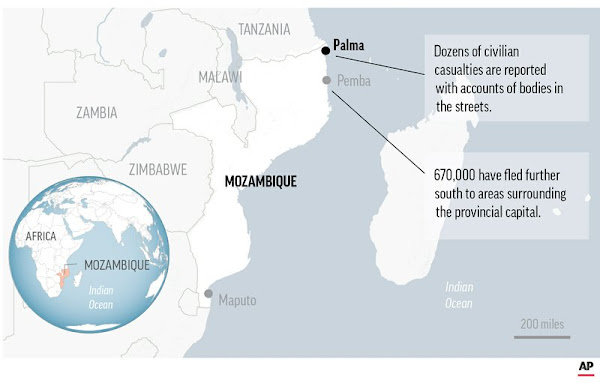 Map locates Palma, Mozambique. Fighting raged for the fifth day Sunday in northern Mozambique as rebels fought the army for control of the strategic town of Palma.

CNN: Evacuation of people trapped by militant attack in Mozambique runs into ambush, reports say
Maputo, Mozambique (CNN)The attempted evacuation of people trapped during an attack in northern Mozambique by Islamist militants has led to multiple casualties, with dozens of people still unaccounted for, according to reports, in what the US embassy in Maputo is calling a "horrific situation."
The town of Palma in Cabo Delgado province was attacked by Islamist insurgents on Wednesday, according to multiple sources contacted by CNN.
Witnesses reported seeing bodies in the streets after the insurgents, believed to be affiliated with the terrorist group ISIS, attacked Palma from three directions, Human Rights Watch said on Saturday.
Read more ….