Are China And Russia Winning In The New Space Race? 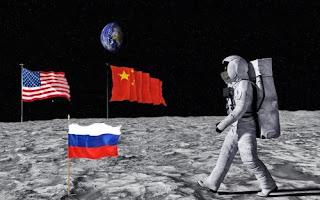 Brandon J. Weichert, RCP: China and Russia Are Winning the New Space Race
Conflict, not cooperation, is going to define international affairs for the foreseeable future. This will be true both on Earth and, more importantly, in the strategic high ground of space.
Fact is, the second space race is on. The world’s powers are playing for keeps. Whoever wins the second space race will rule the world.
Despite the competitive advantages that the United States has in this arena, America’s rivals — namely Russia and China — are catching up.
Unless the Biden administration takes a radical departure from where its nascent space policy is heading, America will lose space and, in so doing, the United States will cease being the world’s superpower.
Read more ….
WNU Editor: Russia and China are exploring ways to work together …. Russia and China unveil plans for joint lunar space station as Moscow drifts away from NASA (NBC). But I am impressed with what China is doing. They are developing a very distinct space culture and widespread support for their program …. China Is Evolving a Distinct Space Culture (The Diplomat).Original Article

Previous Was This Murder Or An Accident?
Next BREAKING NEWS: Stranded Suez Canal Ship Has Been Re-Floated