zekal3_3 3 weeks ago Fashion, Life & Love Comments Off on Ever Given Container Ship Finally Freed In The Suez Canal (News Roundup) 13 Views 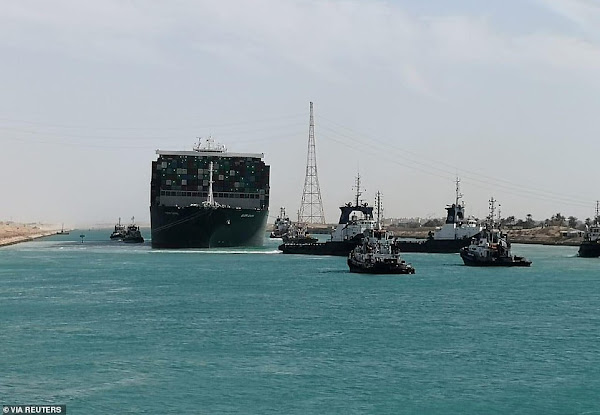 Back on course: The Ever Given was floating in the Suez Canal again and being towed by a fleet of tugboats on Monday as the shipping saga which has brought billions of dollars' worth in trade to a standstill neared its end
Daily Mail: Suez Canal mega-ship is on the move! Ever Given is pulled along by tug boats after it was successfully refloated, allowing goods to be transported again after six-day jam caused delays worth billions of dollars
* Bow of the 220,000-ton Ever Given was finally dislodged from the sandy bank of the Suez Canal on Monday * Fleet of tugboats used high tide to pull on the ship while rescue teams vacuumed sand from the canal bank * It remained unclear how long it would take to fully re-open the canal with £6.5bn of trade held up every day * Japanese-owned vessel got wedged in crucial trading passage last Tuesday, disrupting global shipping
The Suez Canal saga was nearing its end today after the container ship blocking the channel was set free and towed up the waterway by a fleet of tugboats, nearly a week after causing a traffic jam that strangled global trade.
The bow of the 220,000-ton Ever Given was finally dislodged from the canal bank on Monday after tugboats had straightened the vessel in an early-morning operation and dredgers had vacuumed away huge chunks of sand.
The salvage team made a major breakthrough by dislodging the ship's stern and straightening its position, taking advantage of a high tide brought on by a 'supermoon'.
Read more ….
More News On The Ever Given Container Ship Being Finally Freed In The Suez Canal
Giant container ship that blocked Suez Canal finally free — AP
Traffic in Suez Canal resumes after stranded ship refloated — Reuters
Suez Canal traffic resumes after stranded container ship freed — France 24
Suez Canal: Ever Given container ship finally freed — BBC
Ever Given ship freed in the Suez Canal, authority confirms — CNN
Ever Given ship freed in Suez Canal — DW
Suez canal: Ever Given container ship freed after a week — The Guardian
Suez Canal traffic resumes as cargo ship fully floated — ABC News (Australia)
Stranded Ever Given container ship refloated, Suez Canal traffic resumes – authority chairman — RT
Traffic in Suez Canal resumes after stranded ship refloated — Al Jazeera
Suez Canal: How did they move the Ever Given? — BBC The cost of the Suez Canal blockage — BBCOriginal Article