zekal3_3 3 weeks ago Fashion, Life & Love Comments Off on Shocking Details Emerge On How Eight US Marines And A Sailor Drowned In An Amphibious Vehicle Training Accident Last Year 38 Views 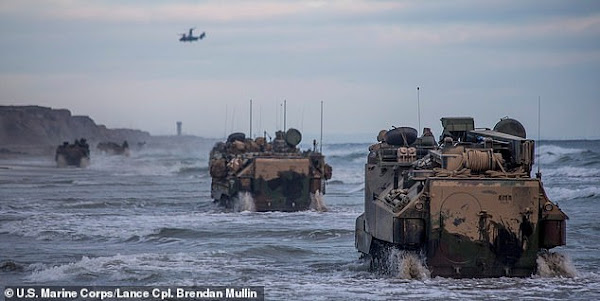 There are about 800 AAV's in the Marin'e inventory that can carry up to 21 people and each weighs 26 tons
Business Insider: Marines who drowned when their AAV sank didn't have breathing devices because the Corps canceled the program to cut costs
* A Marine Corps assault amphibious vehicle sank last summer, and nine people drowned. * Troops didn't have breathing devices because the Corps cut the program years ago to save money. * In the wake of the accident, the Corps has changed its mind and is bringing these devices back.
When a Marine Corps assault amphibious vehicle sank off the coast of California last summer, nine people drowned.
Among the many problems the Corps is trying to rectify in the wake of this accident, troops inside did not have breathing devices.
The embarked service members were not carrying the devices because the Corps made the decision to get rid of them several years ago after assessing that program's $15.9 million cost outweighed concerns about a possible catastrophe, two Corps officials told Insider.
Read more ….
WNU Editor: A lot of things went wrong on this exercise. Including not having the proper breathing equipment. And people are being fired for it …. US Marine Corps fires another commander over the assault amphibious vehicle accident that killed 9 troops (Business Insider).
More News On How Eight US Marines And A Sailor Drowned In An Amphibious Vehicle Training Accident Last Year
The Marine Corps amphibious assault vehicle that sank and killed 9 should never have left the ramp, slides into investigation show — Marine Times
REVEALED: Eight marines and a sailor who drowned in an amphibious vehicle training accident were NOT wearing breathing devices because they had been axed to save money — Daily Mail
Deadly sinking of Marine tank off San Clemente Island was caused by human errors, mechanical woes — AP
Families of Marines and sailor who died in AAV training accident are learning more about what happened — OC Register
'Our boys, they fought to their last breath': Mothers of two Marines killed in training accident seek lasting change — Stars and StripesOriginal Article

Previous U.S. Escalates Military Hardware Deliveries To Ukraine’s Army
Next Was This Murder Or An Accident?