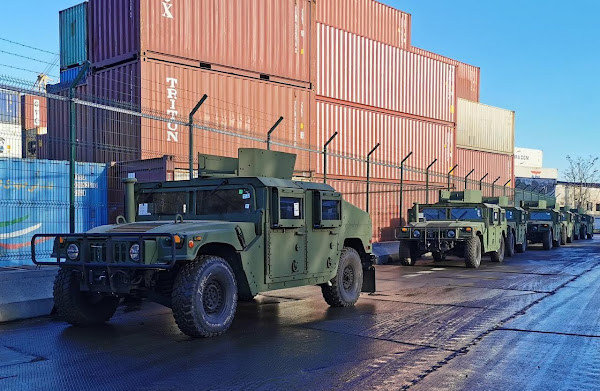 Via from Defence Blog
Zero Hedge: US Makes Large Military Hardware Delivery To Ukraine's Army After Biden Pledged "Crimea is Ukraine"
Russian state sources are alleging that Washington under the Biden administration is ramping up military aid to Ukraine after local media observed a US cargo ship delivering 350 tonnes of military equipment – including tactical vehicles – to Ukraine's Odessa port.
Local media reported the delivery which began late Wednesday and which is said to still be in process Friday.
Ukraine's Dumskaya news agency said the American vessel carried at least 35 US military humvees for Ukrainian national forces.
Read more ….
WNU Editor: This arms shipment does not include this military aid that was approved a few weeks ago …. US announces $125 million in military aid for Ukraine (Defense News).
As to what is my take on these arms shipments.
The Biden administration is signaling that they want a military solution to the conflict in Ukraine, and to deliver a huge geopolitical defeat to Putin.
Sighhh ….
I have said this multiple times in the past and I will say it again. Putting military pressure on the break-away parts of eastern Ukraine is not going to resolve the conflict, and sending US military aid to the Ukraine military to encourage this military pressure is not going to change anything on the ground.
The only way to resolve this conflict is for Kiev to grant autonomy to the Russian dominated provinces in eastern Ukraine, and to let them have control over language, education, and culture in a federated type of system. A position that current President Zelensky understood and supported when he ran for President, and a position that he has since distanced himself from. This change in policy has proven to be costly to President Zelensky, and deservedly so. From someone who was elected with almost 70% of the electorate on a platform to make peace with the eastern part of the country, his polling numbers are now in the low 20s.
So what is my prediction.
My friends, family, and sources in Ukraine tell me that everyone is expecting the low-intensity war in the eastern part of Ukraine to heat up to intense fighting after Orthodox Easter (May 2, 2021) when the snow has melted. My sources have always been right in the past. I expect them to be right on this one.Original Article