How Has The Pandemic Impacted Russia’s Economy?

zekal3_3 3 weeks ago Fashion, Life & Love Comments Off on How Has The Pandemic Impacted Russia’s Economy? 14 Views 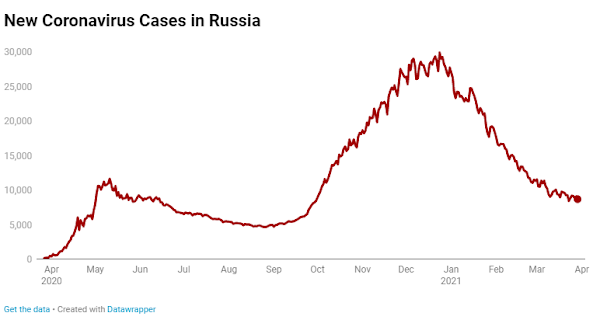 Moscow Times: One Year On: How Russia’s Coronavirus Lockdown Hit the Economy
Russia avoided mass unemployment and a sharp fall in GDP but has one of the world’s highest excess death tolls.
A year ago today Russia went into its first — and only — coronavirus lockdown.
It was first officially declared a “nationwide non-working week,” designed to keep as many people at home as possible and keep Russia’s infection rate low, President Vladimir Putin outlined in an address to the nation days before swathes of the country were shut down.
One week became six and, in mid-May the nationwide lockdown was wound down, with Russia starting to reopen on a region-by-region basis.
As other countries have been plunged into second, third or fourth shutdowns in the months that followed, Russia has held firm — keeping its economy open even as a punishing second wave of the virus pushed regional healthcare systems to the brink.
Read more ….
WNU Editor: The Kremlin was originally predicting Russia’s GDP would fall by more than 10% for the year and that unemployment could hit 15%. Thankfully that did not happened.
What also has not happened is the Kremlin spending money that it does not have like the U.S., Canada, and the EU. Instead … the Kremlin is putting its money in gold, China's yuan, and the Japanese yen …. Russia’s National Wealth Fund gets greenlight for gold investments as Moscow pursues de-dollarization policy (RT).
As to what is my prediction for the Russian economy for this year and the next.
People who I trust and who have been proven right in the past few years see boom times ahead due to higher oil and commodity prices, pent-up internal Russian demand, and sound monetary and fiscal policies. I agree with their analysis. Even with current U.S., Canada, and EU sanctions.Original Article