U.S. Navy Wants Its New Drones To Shoot, Spy, Jam And To Comprise 60% Of Its Carrier Air Wing 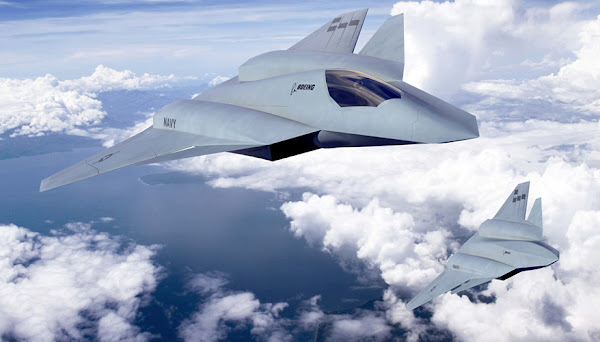 Boeing concept Breaking Defense: Navy’s Emerging Plans Call For New Drones To Shoot, Spy, Jam
"I can clearly — in my mind — envision a way to say ‘fly a defensive combat spread, shoot on this target,’ and I will squeeze the trigger or I will enable that unmanned platform to shoot the designated target," Rear Adm. Gregory Harris says.
WASHINGTON: The Navy now aims to have 60% of its carrier air wing comprise unmanned aircraft as it replaces F-18s.
The Next Generation Air Dominance effort, a joint effort between the Navy and Air Force, is still in its early stages, but the admiral in charge of the Navy’s air wing said today he would like to see a 60/40 mix of unmanned to manned aircraft to replace the F/A-18E/F Super Hornet and electronic attack EA-18G Growlers.
Read more ….
Update: JUST IN: Navy’s Next-Generation Air Dominance Program to Mix Manned, Unmanned Systems (National Defense)
WNU editor: I agree with Rear Adm. Gregory Harris' vision. The only questions that need to be answered are …. will funds be appropriated to make this happen, and if so, when.Original Article

Previous For The First Time In 42 Years A U.S. Ambassador Visits Taiwan
Next Saudi Air Defense Have Been Successful At Stopping Most Houthi Strikes