zekal3_3 2021-03-31 Fashion, Life & Love Comments Off on Chinese Fighter Pilot Says Taiwan ‘This Is All Ours’ When Asked to Leave Airspace 72 Views 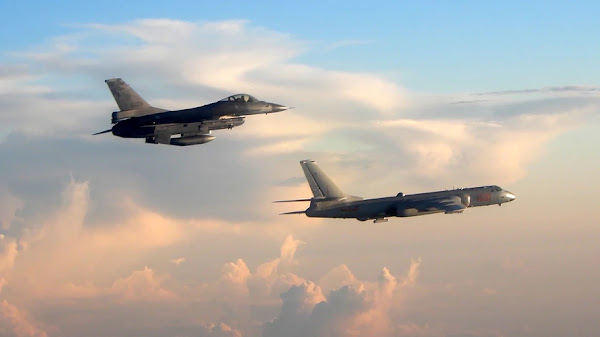 This photo taken May 25, 2018, by Taiwan's Defense Ministry shows Taiwan's F-16 fighter jet, left, monitoring one of two Chinese H-6 bombers that flew over the Bashi Channel south of Taiwan and the Miyako Strait, near Japan's Okinawa Island.
Newsweek: Chinese Fighter Pilot Says Taiwan 'All Ours' After Being Asked to Leave Airspace
Taiwan and its surrounding airspace "is all ours," a Chinese fighter pilot reportedly remarked on Monday as the People's Liberation Army flew jets and spy planes toward the democratic island for more than half the days in March.
According to a recording carried by newspapers in Taipei and acquired by Newsweek, the exchange between pilots from the Republic of China Air Force and PLA Air Force took place at 10:04 a.m. local time after the Chinese warplane flew into Taiwan's southwest air defense identification zone (ADIZ).
Taipei's interceptor aircraft, which was not identified in local reports, dispatched a standard radio warning to its Chinese counterpart: "This is the Republic of China Air Force. The Chinese military aircraft currently flying at 6,000 meters in Taiwan's southwestern airspace, you have entered our airspace and are affecting aviation safety. Turn around and leave immediately."
The reply which came a few seconds later was brief, with the response in Chinese saying: "This is all ours."
Read more ….
WNU Editor: My gut tells me that the Chinese appear to be looking for an "incident".Original Article