Australia And The U.S. Discuss ‘Contingency’ Plans Over A Possible Taiwan Conflict

zekal3_3 2 weeks ago Fashion, Life & Love Comments Off on Australia And The U.S. Discuss ‘Contingency’ Plans Over A Possible Taiwan Conflict 13 Views 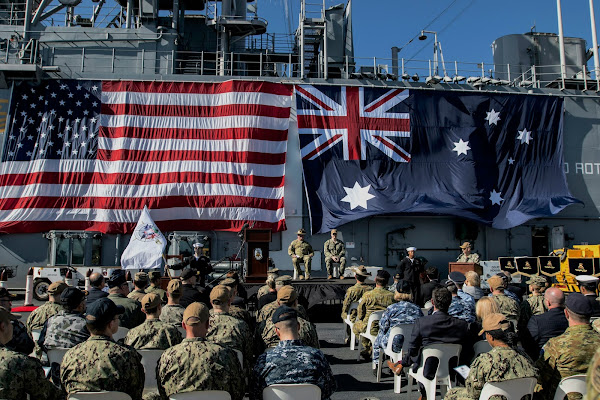 USS Wasp (LHD-1) at the Port of Brisbane, Army Maj. Gen. Roger Noble, deputy chief of Joint Operations (left) and Rear Adm. Fred Kacher, commander, Expeditionary Strike Group 7 (right) begin the closing ceremony for Exercise Talisman Sabre on July 27, 2019. US Army Photo
ABC News (Australia): Australia discussing 'contingency' plans with United States over possible Taiwan conflict
A senior American diplomat says Australia and the United States are discussing contingency plans in case a military conflict erupts over Taiwan.
The US embassy's most senior diplomat currently posted to Australia, Michael Goldman, has also praised Australia for standing up to China's "economic coercion" during the past year.
"We have enormous respect for what Australia's done over the past year, in calling for a COVID investigation, in standing up to economic coercion, and I should say in the course of that proving that your economy is much more resilient in terms of your markets than you may have anticipated," he said.
Read more ….
WNU Editor: The U.S. and Australia are not the only ones discussing contingency plans. I am willing to bet that every country in Asia are in the middle of having discussions, and making preparations.Original Article

Previous Facebook And Instagram Ban Former President Trump’s Interview With His Daughter-In Law Where He Signals He Will Run For President In 2024
Next Former Commanding General Of The U.S. Army Europe Says No Russians Died In WW2, Only Ukrainians