Former Commanding General Of The U.S. Army Europe Says No Russians Died In WW2, Only Ukrainians 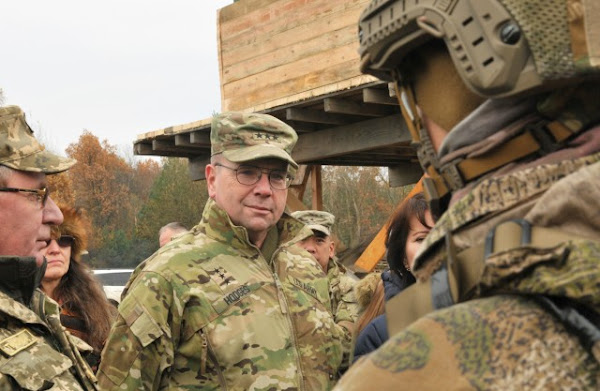 Then Lt. Gen. Ben Hodges speaks with a Ukrainian soldier assigned to 1st Battalion, 80th Airmobile Brigade, during a visit to the International Peacekeeping and Security Center, Lviv, Ukraine. During his visit, Hodges witnessed the opening of a new g… (Photo Credit: U.S. Army)
RT: Moscow expresses disgust after US general turned arms industry lobbyist Ben Hodges says no Russians died in WW2, only Ukrainians
Retired US Army Lieutenant General Ben Hodges has been accused of an “outright and primitive lie,” after casting doubt on the consensus that Russia lost millions of lives during World War II, claiming they were all Ukrainians.
Hodges is the former Commanding General of the United States Army Europe and now serves as a lobbyist at the Center for European Policy Analysis (CEPA), a Washington and Warsaw-based pressure group that promotes the agenda of US military contractors in Eastern Europe.
In addition to arms industry interests, it is also funded by the US State Department and NATO.
Read more ….
WNU editor: How these incomprehensibly stupid and ignorant people become high ranking generals and (when they retire) million dollar consultants/policy wonks always perplexes me. In the case of Lt. Gen. Ben Hodges, his opinions on Russia are well known …. Top U.S. Army Commander In Europe: Europe Faces A 'Real Threat' From Russia (April 19, 2015).Original Article

Previous Australia And The U.S. Discuss ‘Contingency’ Plans Over A Possible Taiwan Conflict
Next Four Women Of Color Make History As Commanders Of U.S. Navy Warships