zekal3_3 2 weeks ago Fashion, Life & Love Comments Off on Canada In A Race To Vaccinate Its Population Before The Variants Of The Covid-19 Coronavirus Become Dominant 14 Views 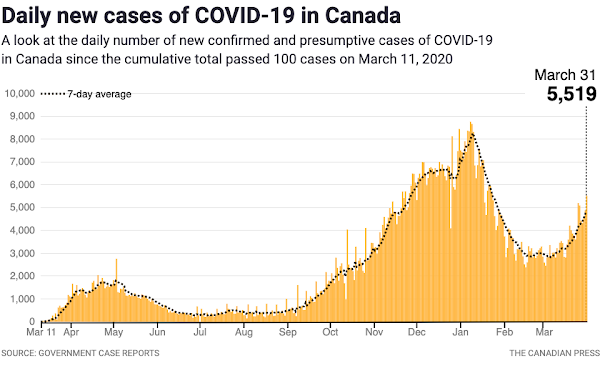 BBC: Is Canada turning the corner with Covid?
Canada has secured the largest vaccine portfolio in the world but has so far failed to get its inoculation program off the ground, even as it faces the pandemic's third wave.
In December, Canada's Deputy Prime Minister Chrystia Freeland announced a C$1bn (£580m) investment in vaccine agreements. Ottawa had secured seven separate vaccine purchase contracts, she said, enough for each Canadian to receive 10 doses, free of charge.
Four months later, Canada is still lagging behind most Western nations in vaccinations. It is currently ranked 44 in global rankings of vaccinations per capita, according to data compiled by Bloomberg.
Read more ….
WNU Editor: I live in Montreal, Canada, and it has been a year of lockdowns, limited contacts with people, curfews, and economic/social hard times. And if what is happening in Canada's largest province an indication, no signs yet of improvement …. Ontario imposes four-week provincewide 'shutdown' to combat spike in COVID-19 cases (National Post/Canadian Press).Original Article

Previous Picture Of The Day
Next U.S. And Iran Agree To Indirect Talks Next Week On Returning To Nuclear Deal