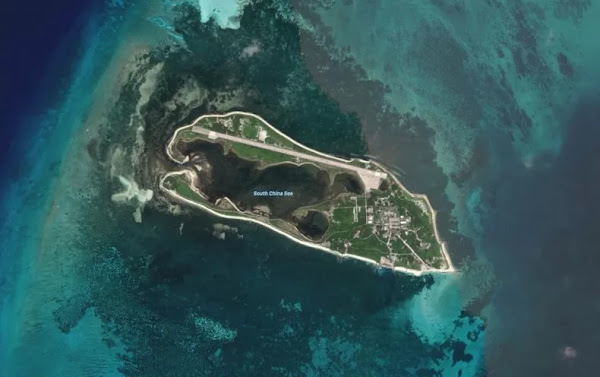 This satellite image shows Dongsha Island, also known as Pratas Island, which is in the South China Sea roughly 275 miles from Taiwan. APPLE MAPS
Newsweek: Chinese Drones Spotted Gathering Intel Around Taiwan Islands
Unmanned aerial vehicles belonging to the Chinese military have been gathering intelligence around a Taiwan-controlled island in the South China Sea, the Taiwanese coast guard has reported.
The Coast Guard Administration will step up defense preparations on the islands of Dongsha and Taiping—also known as Pratas and Itu Aba respectively—following recent drone sightings around the former.
In a report given to legislators ahead of a parliamentary hearing on Thursday, Taiwan's coast guard said the drone activity, likely for reconnaissance purposes, was in addition to the Chinese warplanes that frequently fly into the country's air defense identification zone.
Read more ….
WNU editor: Taiwan should prepare for the worse.Original Article

Previous Picture Of The Day
Next Tweets Of The Day