Could Ukraine-Russia Border Tensions Escalate Into A Fresh Conflict?

zekal3_3 3 weeks ago Fashion, Life & Love Comments Off on Could Ukraine-Russia Border Tensions Escalate Into A Fresh Conflict? 14 Views 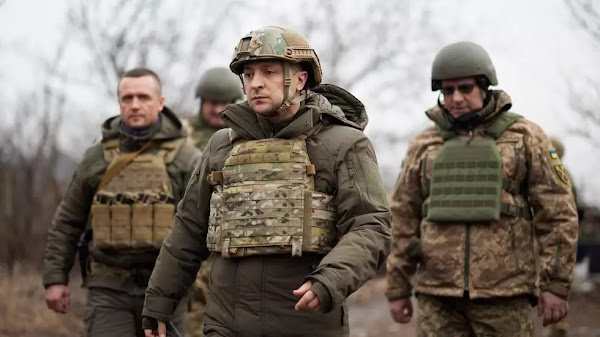 Ukrainian President Volodymyr Zelenskiy, centre, surrounded by servicemen as he visits the war-hit Donetsk region, eastern Ukraine, on February 11, 2021. © Ukrainian Presidential Press Office
Euronews/AP: Could Ukraine-Russia border tension escalate into a fresh conflict?
Tensions are rising between Kyiv and Moscow over reports of Russian military maneuvers on the border with Ukraine.
Unverified footage posted on social media appears to show Russian tanks being moved to areas that include annexed Crimea and territories controlled by Moscow-backed separatists.
It comes after the OSCE's Special Monitoring Mission to Ukraine reported hundreds of ceasefire violations in recent days – including 493 in the Donetsk region on March 26, mostly small-arms fire.
Read more ….
WNU Editor: In the past week there has been hundreds of ceasefire violations on the Ukraine-Donetsk border region. And after President Biden's remarks two weeks ago that Crimea belongs to Ukraine and that Russia "will be punished", followed by major NATO exercises in the Black Sea, Russia has responded with major military deployments to Crimea and near the Ukraine border.
But will all of this rhetoric and military deployments lead to a fresh conflict?
A few weeks ago I would say no. Today …. I am not sure.
What concerns me is the rhetoric that I am reading and hearing from the Ukraine government …. especially in the past two days. And when I talked to a cousin who lives there and a good friend and long time contact who is also a member of parliament on what is happening this afternoon, they just confirmed to me my worst fears.
For some reason there is a belief among some in the Ukraine government that the U.S. would intervene on their side if an all-out war breaks out again in the eastern part of the country. And with this belief …. rightly or wrongly …. some hard-core nationalists in the Ukraine media and government are now pushing for a major resumption of hostilities.
I think this is a prescription for disaster.
People in the West are ignorant on how divided Ukraine really is, and how much the south and eastern part of the country is dominated by Ukrainian-Russians. Ukrainian-Russians who for the past few years have been seething with anger and resentment over discriminatory language and cultural laws enforced by the central government. The below France 24 video reports on how bitter this has become.
That is why I shudder on what would happen if a new conflict erupts. The Ukraine military may look great from the outside, but I know it is a conscript army with low morale. The people that I trust and who are knowledgeable about these things tell me that the soldiers who are deployed on the front lines far from home shudder to not only find themselves in a situation where they may find themselves fighting against a foe that knows the terrain and calls it home, but maybe also against the civilian population behind their backs.
During the Second World War the German army regarded the occupied territories in the eastern part of Ukraine to be not only ungovernable, but one of the most dangerous regions for a German soldier to be stationed. I should know. The relatives on my father's side are Russian-Ukrainians.
Fighting and rebellion has always been in their blood. Even during the height of the Soviet Union the Kremlin regarded this part of the country difficult to rule, a concern that was justified because it was in Donetsk that the first massive labour strikes and protests against the Soviet Union broke out …. strikes and protests that quickly spread throughout the USSR leading to its eventual break-up.
Flash forward to today. Long time readers of this blog have heard me say repeatedly that this is a conflict that should be avoided at all costs. That there is a peaceful solution if the Ukraine government decides to respect the language and culture of its citizens in the east, and be willing to give these regions the power to govern themselves under a federal system like the one in Canada.
Ukraine President Zelinsky himself ran on this platform, and was elected overwhelmingly for it. To say that I was relived with his victory at the time is an understatement. I felt there was hope.
Unfortunately. President Zelinsky has broken his promise to the people who supported and elected him, and he has chosen to go down a different path. I do not know why he has made this decision. But I do know that the dogs of war are now gathering, and there is a very real possibility that this conflict may explode in the coming weeks.
In a previous post I said that major fighting may start after Orthodox Easter (May 2). I have been wondering this afternoon if it may happen sooner.
Original Article

Previous U.S. And NATO Alarmed By Growing Tensions Between Russia And Ukraine
Next Tonight’s Movie Is ‘Battle Of Britain’ (1969)