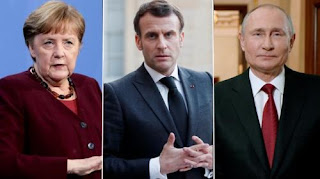 Zero Hedge: EU Infighting Over Vaccine Supplies Intensifies As France, Germany Turn To Russia
Alexei Navalny is on hunger strike, prompting European governments to again criticize the Kremlin for alleged human rights abuses (both the US and EU slapped more sanctions on Russia over Navalny's alleged "poisoning" and are now complaining about Russian troop movements near the Ukrainian border) and demand his release.
But while they publicly bash President Vladmir Putin, European leaders are quietly negotiating with his government to try and get their hands on supplies of "Sputnik V".
At this point, the US has tried to pressure friendly governments into rejecting the vaccine to no avail. With Washington hogging most of its supplies, asking allies to pass up desperately needed vaccines to help further a geopolitical agenda was simply too big an ask.
Despite Brussels' scorn, Russia has struck a production deal with Italy, – while Hungary and Slovakia have already approved the vaccine for use on adults.
Read more ….
WNU Editor: Even though their vaccine roll-out has been a disaster, the EU is saying that there is no need for Russia's Covid-19 vaccine …. EU has 'absolutely no need' of Sputnik V vaccine, commissioner says (Reuters). For an organization that has lost its credibility, I am not surprised to be reading this …. More EU countries eyeing separate deals with Russia for Sputnik vaccine (Politico).
More News On Russia's covid-19 Vaccines Being Wanted In The EU
Merkel, Macron and Putin in talks on using Sputnik V jab in Europe, says Kremlin — The Guardian
Coronavirus: Will EU soon roll out Sputnik V vaccine? — DW
Europe divided over two vaccines: AstraZeneca and Sputnik V — Axios
Europeans Divided Over Sputnik Diplomacy — VOA
San Marino, the micronation within Italy, stokes envy with speedy Russian-supplied vaccine campaign — Washington PostOriginal Article

Previous Are We On The Verge Of An Air Combat Revolution?
Next Picture Of The Day