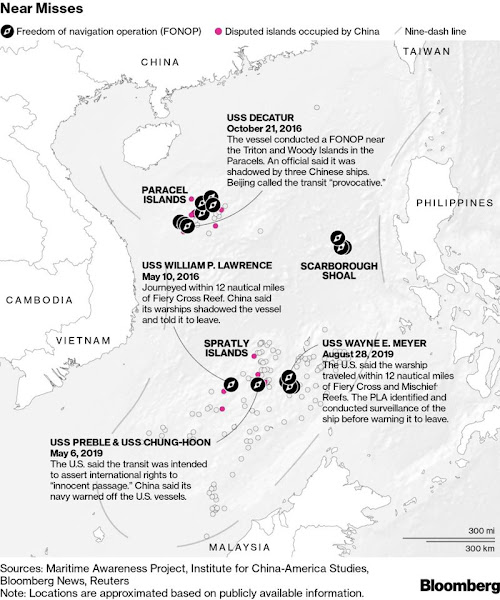 Bloomberg: China Tests Biden With South China Sea Tactic That Misled Obama
* Philippines lashes out at China as fishing boats swarm reef * ‘Everything we have done is more rhetorical than substantive’
Based on the official view from Beijing, the Philippines has no reason to worry about Chinese fishing boats sitting along a disputed reef in the South China Sea.
The vessels — initially numbering in the hundreds — were simply “taking shelter from the wind” and the Philippines should view the situation in a “rational light,” Chinese Foreign Ministry spokeswoman Hua Chunying said on March 22 when the news first broke.
Two weeks later, more than 40 boats are still at Whitsun Reef and the statements are getting more and more terse. The Philippine Foreign Affairs Department on Monday warned China it would issue daily diplomatic protests as long as the “maritime militia” remains in place, using the same language as the U.S. to describe the fleet stationed in an area known as Julian Felipe Reef in the Philippines and Niu’e Jiao in China.
Read more ….
WNU Editor: China crossed the "Rubicom" when it comes to their territorial claims to the South China Sea a decade ago. That is why I say China is not testing President Biden with its South China Sea tactics. I would even venture to say that Beijing does not really care what the U.S. thinks when it comes to the South China Sea. In Beijing's mind the South China Sea now belongs to them, and they are going to enforce these claims regardless of what the U.S. or the world thinks or does.Original Article