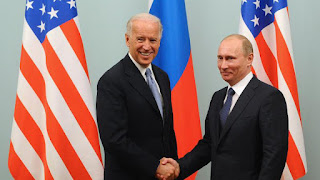 CGTN: 'Russia-U.S. ties worst in 41 years': How much worse could it get?
Russian President Vladimir Putin said in June 2019 that relations between Moscow and Washington were going downhill and getting worse.
Experts believe that Putin's gloomy assessment is now coming true, and Spain's media El Mundo said it's the worst moment for the Russia-U.S. relationship in 41 years.
Does the renewal of New START signal a thaw?
While Russia and the U.S. quickly agreed to extend the New START arms control pact days after U.S. President Joe Biden took office, experts don't believe the extension means a thaw in the Russia-U.S. relationship.
Read more ….
WNU Editor: Like the above CGTN post. My Chinese friends are convinced that U.S. – Russian relations are going to get worse.
As to what is my take.
I definitely agree.Original Article