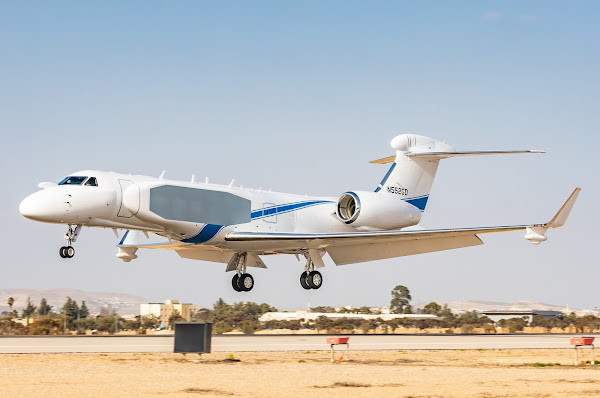 Photo by Amit Agronov
Warzone/The Drive: Israel’s New Surveillance Jet Combines Two Other Aircraft’s Missions Into A Single Airframe
The Nachshon Oron is the first of an undisclosed number of advanced multi-mission intelligence-gathering aircraft for Israel.
The Israeli Air Force has unveiled a new multi-mission intelligence-gathering aircraft, the Nachshon Oron. The new aircraft will join an existing fleet of airborne early warning and signals intelligence platforms, all based on the Gulfstream bizjet airframe, but will add important new capabilities, including those focused on the maritime domain.
The Israeli Air Force (IAF) announced yesterday that the Oron had been formally unveiled by 122 Squadron, “Nachshon,” a specialist intelligence, surveillance, and reconnaissance (ISR) unit at Nevatim Air Base in Israel’s Negev desert. The aircraft, based on a Gulfstream G550 airframe, arrived in Israel last month, after delivery from the United States where it was manufactured and flight-tested. It wore the temporary registration N552GD for its delivery flight, which took it via a stopover in Shannon, Ireland.
Read more ….
Previous Post: Israel Receives A New Spy Plane It Says Will Help Gather Intel In Iran, Yemen, Iraq, And Syria (April 4, 2021)
WNU Editor: A lot of work went into planning, designing, and building this surveillance aircraft …. nine years have been spent on designing and developing the aircraft and its subsystems.Original Article

Previous US Navy Hospital Corpsman Shot And Critically Wounded Two People In Maryland. Went To Fort Detrick Where He Was Fatally Shot By Personnel There
Next The Pentagon Is Spending Billions On Hypersonic Missiles To Catch-Up To Russia And China