Is Beijing Accelerating It’s Timeline For A Possible Invasion Of Taiwan?

zekal3_3 2021-04-07 Fashion, Life & Love Comments Off on Is Beijing Accelerating It’s Timeline For A Possible Invasion Of Taiwan? 44 Views 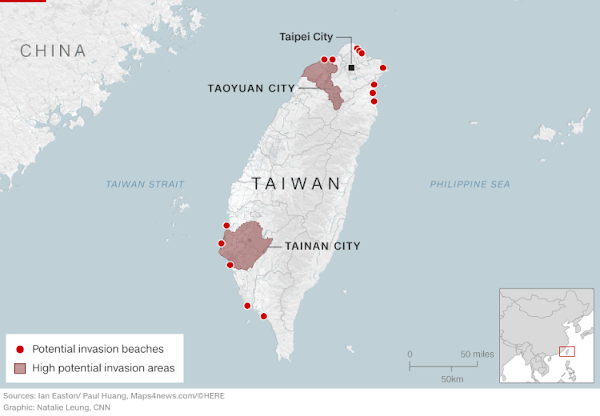 Epoch Times/Zero Hedge: Beijing Accelerating Timeline For Possible Invasion Of Taiwan, Expert Warns
The Chinese communist regime is accelerating its plans to invade Taiwan, an expert warns, as Beijing ratchets up military maneuvers against the island.
Twenty Chinese military aircraft – including four nuclear-capable H-6K bombers, 10 J-16 fighter jets, two Y-8 anti-submarine warfare aircraft, and a KJ-500 airborne early warning and control aircraft – entered Taiwan’s air defense identification zone (ADIZ) on March 26, according to Taiwan’s Ministry of National Defense. It was the largest incursion ever reported by the ministry.
Taiwan’s ADIZ, located adjacent to the island’s territorial airspace, is an area where incoming planes must identify themselves to the island’s air traffic controller.
The incursion caps off a significant increase in hostility by Beijing against Taiwan since 2020. Taiwan’s President Tsai Ing-wen, re-elected last January, has taken a hard line against threats posed by the Chinese Communist Party (CCP), while the island has deepened its cooperation with the United States—prompting the regime to escalate its warmongering towards the island.
Read more ….
WNU Editor: China's military behavior towards Taiwan has certainly changed in the past few months. But to successfully invade Taiwan will take enormous resources, planning, logistics, and preparation. such a massive buildup will also be detected immediately, resulting in Taiwan, the U.S., and other allied countries building-up their military resources to respond to such an attack. Bottom line. Its going to take a few years for China to achieve any level of certainty of success in an invasion of Taiwan, and only if countries like the US withdraw their political and military commitment to Taiwan.Original Article

Previous World Health Organization Wins Dismissal Of New York Lawsuit For Gross Negligence Over Its Covid-19 Coronavirus Pandemic Response
Next Iran And U.S. Agree On A Roadmap To Revive The Nuclear Deal