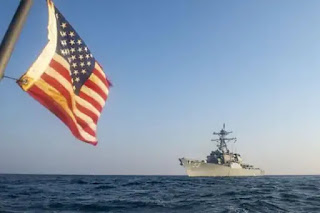 India conveys concerns to US

In what could lead to serious questions on the India-US relations, the US Navy has announced that it has ‘asserted’ navigational rights in the Arabian Sea and inside India’s Exclusive Economic Zone (EEZ), without requesting India’s prior consent.

The 7th Fleet of the US Navy has made an announcement about one of its warships saying “USS John Paul Jones (it) asserted navigational rights and freedoms approximately 130 nautical miles west of the Lakshadweep Islands.

This freedom of navigation operation (“FONOP”) upheld the rights, freedoms, and lawful uses of the sea recognised in international law by challenging India’s excessive maritime claims.”

WNU Editor: The U.S. does not have many supporters for what they are doing …. The 7th Fleet Commander Statement Shows Just One Thing—United States’ Stupidity (News 18).

India Objects to US Navy Ship's Patrol Without Consent — Military.com/AP