How Many Lives Has The Covid Pandemic Really Claimed In Russia In The Past Year ? (Update) 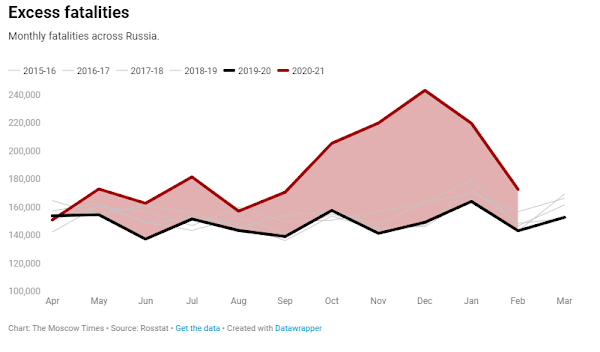 The country’s official coronavirus death toll is 102,649. But at least 300,000 more people died last year during the pandemic than were reported in Russia’s most widely cited official statistics.

SAMARA, Russia — She burst into the hospital morgue and the bodies were everywhere, about a dozen of them in black bags on stretchers. She headed straight for the autopsy room, pleading with the guard in a black jacket: “Can I speak to the doctor who opened up my father?”

Olga Kagarlitskaya’s father had been hospitalized weeks earlier in a coronavirus ward. Now he was gone, cause of death: “viral pneumonia, unspecified.” Ms. Kagarlitskaya, recording the scene on her smartphone, wanted to know the truth. But the guard, hands in pockets, sent her away.

There were thousands of similar cases across Russia last year, the government’s own statistics show. At least 300,000 more people died last year during the coronavirus pandemic than were reported in Russia’s most widely cited official statistics.

Not all of those deaths were necessarily from the virus. But they belie President Vladimir V. Putin’s contention that the country has managed the virus better than most. In reality, a New York Times analysis of mortality data shows deaths in Russia during the pandemic last year were 28 percent higher than normal — an increase in mortality greater than in the United States and most countries in Europe.

WNU Editor: The New York Times is reporting on a story that WNU covered a week ago …. Russia’s Excess Death Toll Hits 422K Since the Start Of The Pandemic (April 5, 2021).