Is The U.S. Economy On The Cusp Of A Major Boom? 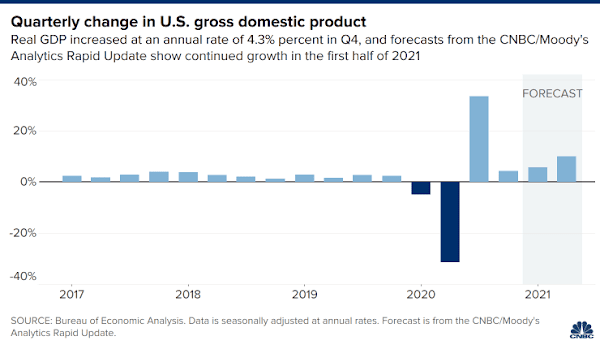 CNBC: The economy is on the cusp of a major boom and economists believe it could last

* The economy is just starting a boom period, where second-quarter growth could top 10%, and 2021 could be the strongest year since 1984.

* The second quarter is expected to be the strongest, but the boom is not expected to fizzle, and growth is projected to be stronger than during the pre-pandemic into 2022.

* A period of supercharged growth is just starting, and it is showing up in surging consumer spending and in an increasing shortage of skilled workers.

* With surging demand could come inflation, something the economy has avoided for more than two decades.

The economy has entered a period of supercharged growth, and instead of fizzling, it could potentially remain stronger than it was during the pre-pandemic era into 2023.

In the past decade, there have been few quarters where gross domestic product grew at even 3%. Forecasts for 2021 and 2022 were revised higher after Congress approved $1.9 trillion in fiscal spending, on top of an earlier $900 billion package late last year.

WNU Editor: Some people are obviously doing well. But I do not see this US economic boom happening for the common person. Not even close. What I see is a lot of desperation and worry …. This Economic Depression Has Left Very Deep Economic Scars All Over America (The Most Important News).

But the U.S. is not alone. In the country where I live (Canada), I am seeing the same desperation and worry …. 53% Of Canadians On Brink Of Insolvency (Zero Hedge). No so for my friends and contacts who live in China. they are telling me that everything is back to "boom times".

Previous Iran’s Nuclear Chief Calls Natanz Atomic Site Blackout An Act Of ‘Nuclear Terrorism’
Next How Did A Canadian Ski Resot Become The Largest Outbreak Of The P1 Covid Variant Outside Of Brazil?