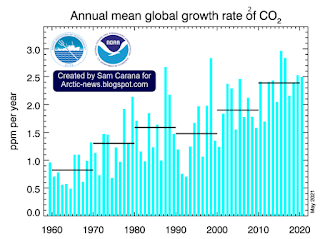 At the Paris Agreement in 2015, politicians pledged to limit the global temperature rise from pre-industrial levels to 1.5°C and promised to stop rises in greenhouse gas emissions as soon as possible and to make rapid reductions in accordance with best available science, to achieve a balance between people's emissions by sources and removals by sinks of greenhouse gases in the second half of this century.

Yet, greenhouse gas levels keep rising and the rise appears to be accelerating. 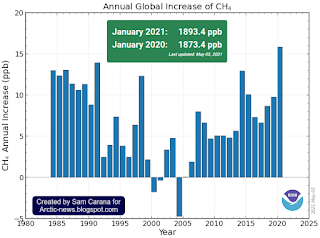 The 2020 global annual methane growth rate of 15.85 ppb was the highest on record. The global methane level in January 2021 was 1893.4 ppb, 20 ppb higher than the January 2020 level.
The image at the top shows a trend indicating that methane could reach a level of 4000 ppb in 2026, which at a 1-year GWP of 200 translates into 800 ppm CO₂e, so just adding this to the current CO₂ level would cause the Clouds Tipping Point at 1200 CO₂e to be crossed, which in itself could raise global temperatures by 8°C, as described in an earlier post. 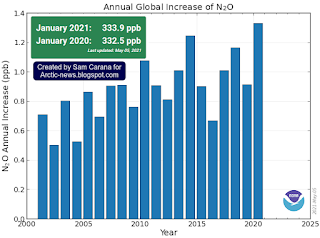 Nitrous Oxide
The 2020 global annual nitrous oxide (N₂O) growth rate of 1.33 ppb was the highest on record. The global N₂O level in January 2021 was 333.9 ppb, 1.4 ppb higher than the January 2020 level.
Greenhouse gas levels are accelerating, despite promises by politicians to make dramatic cuts in emissions. As it turns out, politicians have not taken the action they promised they would take.
Of course, when also adding nitrous oxide, the Clouds Tipping Point can get crossed even earlier.
Elements contributing to temperaure rise
Next to rising greenhouse gas levels, there are further elements that can contribute to a huge temperature rise soon. 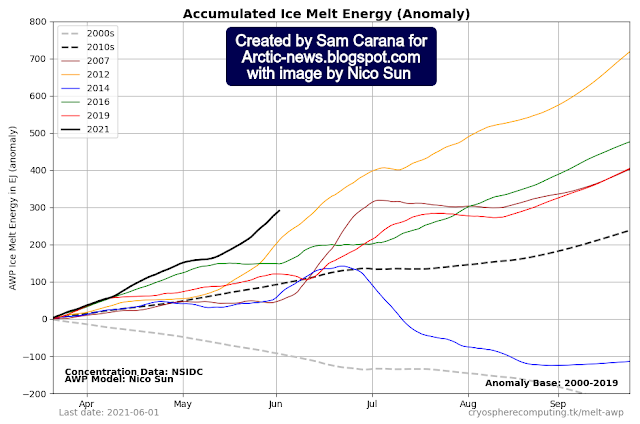 As illustrated by above image by Nico Sun, the accumulation of energy going into melting the sea ice is at record high for the time of year.

As illustrated by above combination image, the thickness of the sea ice is now substantially less than it used to be. The image compares June 1, 2021 (left), with June 1, 2015 (right).
The animation on the right shows that sea ice is getting rapidly thinner, indicating that the buffer constituted by the sea ice underneath the surface is almost gone, meaning that further heat entering the Arctic Ocean will strongly heat up the water.
As described in an earlier post, this can destabilizate methane hydrates in sediments at the seafloor of the Arctic Ocean, resulting in eruption of methane from these hydrates and from methane that is located in the form of free gas underneath such hydrates.

Such methane eruptions will first of all heat up the Arctic, resulting in loss of Arctic sea ice's ability to reflect sunlight back into space (albedo feedback), in disappearing glaciers and in rapidly thawing terrestrial permafrost (and the associated release of greenhouse gases).
This comes with further feedbacks such as changes to the Jet Stream that result in ever more extreme weather including storms and forest fires.
Temperatures can also be expected to rise over the next few years as sulfate cooling decreases. Aerosols can further cause additional warming if more black carbon and brown carbon gets emitted as a result of more wood getting burned and more forest fires taking place.
Therefore, the 8°C rise as a result of crossing the Clouds Tipping Point would come on top of the warming due to other elements, and the total rise could be as high as 18°C or 32.4°F from preindustrial, as ilustrated by the image on the right, from an earlier post.
In conclusion, there could be a huge temperature rise by 2026.
At a 3°C rise, humans will likely go extinct, making it from some perspectives futile to speculate about what will happen beyond 2026.
Even so, the right thing to do is to help avoid the worst things from happening, through comprehensive and effective action as described in the Climate Plan.