Is there a name for this? It's that feeling you get when a major sporting event—The Masters, the World Series, the Stanley Cup final or in this case, Wimbledon—has come to a close for another year. It's not a hangover, for you just can't get enough of good golf, football, tennis and so forth. And yet, it's a powerful cocktail comprised of one part gratitude, two parts melancholy and residual adrenaline. The amount of that ingredient depends on the outcome of the contest. For example, Philadelphia fans are still enjoying that Kool-Aid from the 2018 Super Bowl W. At any rate, this unnamed feeling it what I took to the table as I had breakfast without Wimbledon for the first time in a fortnight. Sans strawberries and cream, I began to make sense of the memories from the past 12 days. Enjoy. 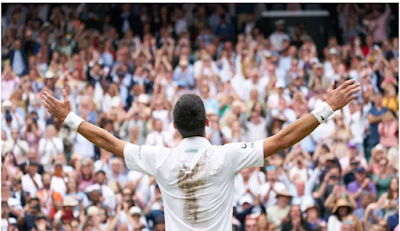 Tennis is at a critical juncture
I imagine most Americans were unfamiliar with the majority of players in the semifinal matches of both the men's and women's draw. While Djokovic is certainly no stranger to the game or to Wimbledon finals (he is the fourth player to have won three in a row), the Canadian who was born in Russia, the Polish phenom and Italian finalist Matteo Berrtini were most likely new names to the average fan. On the women's side, to not have a semifinalist representing the red, white and blue and/or specifically one named Williams was newsworthy.
The big three: Federer, Nadal and Djokovic aren't getting any younger. Neither are Serena and Venus. The fact that their careers have extended as long as they have is remarkable. It's time for fresh blood and for new chapters of this great game to be written.

Tennis has been here before and will be here again. I would like to think in the men's game the future looks Azzurri! Berrettini has an outstanding game and on the women's side perhaps we will get more of… 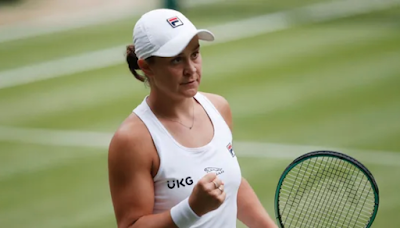 A Case for the Multi-Sport Athlete Ash Barty
I've grown weary of arguing FOR the multi-sport athlete. As far as I'm concerned, it shouldn't even be a debate or a discussion. Play sports (plural) young people. Enjoy lots of them. And let's celebrate the success of the men and women who master more than one.

Look no further than Ashleigh (Ash) Barty. In 2014, the number one player in the world played cricket—professionally! In an interview with Purav Jose of Essentially Sports, she said:

“It’s something I am super passionate about. I probably watch more cricket, more Australian rules, more Aussie games than I do tennis if I am being honest. Absolute sport, I love it,”

After her revelation, one might assume that she might have chosen to play cricket over tennis. However, she mentioned that it was something that came her way during her break.

She said, “I didn’t stop playing tennis to go and play cricket. It was more than after about 12 months an opportunity came up, and I thought, ‘Why not? Give it a crack and see how we go’. It was really enjoyable; I loved it. I always wanted to challenge myself and to try new things and try different things.”

Jose's praise is not an exaggeration. Barty is a plus 2 handicap. In other words, she shoots 2 strokes under par on average at most courses. #shero!! 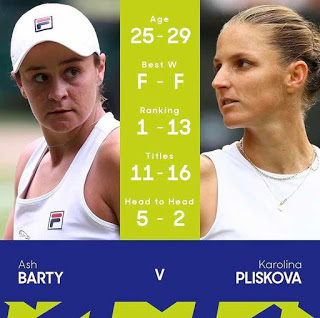 I love her incredibly athletic style of play, and her championship mentality. In her trophy speech she told Pliskova, "I love testing myself against you, and I'm sure we'll play many, many more matches." The best opponents test us and true champions appreciate how they can do this. Case closed on Ash Barty. I too, look forward to more tests, more matches from her and future opponents….whoever they may be!

Beauty in Simplicity
I am a fan of standards, uniforms and dress codes. I have no problem playing by and enforcing "the rules." I also believe they are worth revisiting and revising if and as necessary. I know such expectations are not without bias nor complication and yet, I value having them.

Requiring all players to wear white is fascinating to me. Why? Part of me just can't believe they get away with it. But, I'm not naive. It's England. The Duke and Duchess of Cambridge are in attendance. The line judges were button down shirts and ties. I have heard about the cost of tickets; I don't know that I will ever attend.

While their dress code may feel antiquated, I think the end result is spectacular. The contrast of white clothing against the green grass is striking.

Perhaps it is an unintended consequence, but the uniformity leads me to focus more on the tennis and less on clothing, loud colors, patterns and prints. Yes, tennis players are already a walking billboard—advertising for FILA, Rolex or Slazenger— and, I have to admit I spend a little more time taking inventory of some women's jewelry, who has tattoos, etc. But, when I think of Wimbledon, my mind's eye remembers the dark purple and forest green logo, the iconic scoreboards and the athletes who serve, hit and volley dressed in but one hue (is white even a color?). Truly, I find beauty in the simplicity. You? 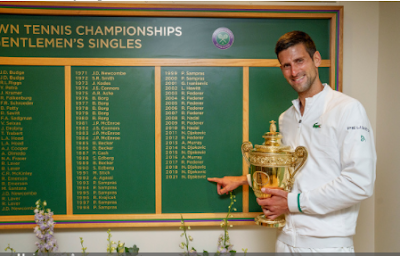 The I in Team
Have you heard? There is a team in tennis.

Single's tennis is an individual sport. So is golf, swimming and running, minus the relays. And yet, Barty and Djokovic went out of their way to acknowledge and thank their "team."

For tennis players the team consists of one's coach, physio, hitting partner, business manager and more. You will see these men and women sitting together in a designated area, often wearing sunglasses and sitting near or beside the player's family (who is naturally part of the team).

Every last part of me ought to celebrate the "we" mentality of the game. None of us can achieve greatness on our own. Why not give a shout out and call the supporting cast, "team?"
I'm just not sure I buy it. Why? When a player loses, he or she assumes the responsibility….at least publicly. Furthermore, playing a "team" sport is very different.

I coach an individual sport that seeks to operate as a team. It's very challenging to change the mindset. I will lean into what these athletes have to offer… 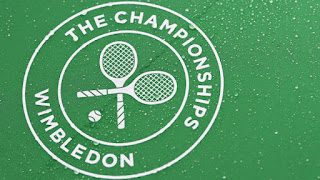 In Closing
Due to COVID, it has been two years since the last fortnight at Wimbledon. The enthusiasm of the crowd and from the players revealed their excitement and gratitude times two…or ten. And, as much as I LOVE the US Open, Wimbledon is second to none.

It's a joy to watch and when it comes to a close, we are all too thankful game, sets and matches. If we weren't, it wouldn't feel like it does…whatever that is.