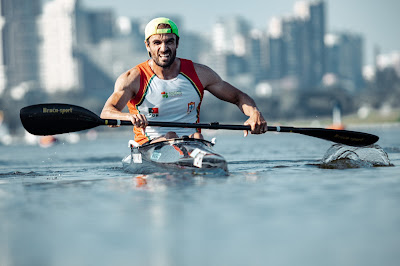 38-year old Portuguese canoe marathon paddler Jose Ramalho was in the spotlight of Saturday’s races at Krylatskoe Olympic regatta course in Moscow. He did not only win his second title of this European Championships (he was the best already in short marathon race), but also wrote history by winning his seventh European Champion title in canoe marathon. Men’s 29.8 kilometres long race was exciting until the very end. In the finish of the race Ramalho found more strength and crossed the finish line only one second ahead of French competitor Cyrille Carre. Bronze went to France thanks to Stephane Boulanger, who was 2.11 seconds behind Ramalho. Adrian Borosfrom Hungary was outside the podium on 4th place, and was only 2.43 seconds behind the new European Champion.

In women’s K1 race Vanda Kiszli (Hungary) defended her European Champion title from 2019 and European Championships in Decize. Kiszli, who is also defending World Champion in this event, was 1.75 seconds faster than her teammate Zsofia Czellai, while Serbia’s Kristina Bedec picked up bronze medal. The same three competitors were on the podium of Thursday’s short race too, but it was Bedec who claimed the European Champion title, Kiszli was second and Czellai third.

In absence of Spanish team and Manuel Campos, the 2019 European and World Champion, Marton Kover quickly became the favourite number one for the title in men’s C1 race. He predictions were true as he did not have much trouble getting to the highest podium position. Kover was more than four and a half minutes faster than Russian Roman Erlinekov on second place, while Hungarian Daniel Laczo won bronze medal.