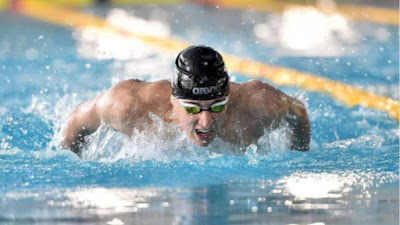 Josif Miladinov became the first swimmer with two individual titles at the 2021 European Junior Swimming Championships in Rome, the Bulgarian won the 100m fly after having come first in the 50m earlier. Russia also continued its golden quest: just like in the previous two days, an individual triumph (Aleksei Tkachev, 50m back) was followed by a relay victory (men’s 4x200m free). Simone Cerasuolo delivered the first win in the men’s competition for Italy, in the 50m breast, and Hungary also claimed its first individual title in Rome, courtesy of Nikoletta Padar in the 200m free. Justine Delmas produced a first gold for France, in the 200m breast, while Romania’s wonderkid David Popovici set a new junior European record in the 200m free semis.

Josif Miladinov completed the 50-100m double in the men’s butterfly – since he was runner-up at the ‘big’ Europeans in Budapest in the 100m, he was the absolute favourite and even though his speed was not the same as in May, his first place was never in danger. Here Diogo Matos Riberio clinched Portugal’s first medal here, a silver, while Britain’s Edward Mildred added a bronze to his silver from the 100m free.

Poland’s Ksawery Masiuk was just 0.14sec away from achieving the same double feat in the backstroke but Russia’s Aleksei Tkachuk had the golden touch at the wall in the 50m, to keep the 100m champion at bay (Tkachuk was third in the longer event).

The breaststroke dash also saw a couple of youngsters collecting their second medals here respectively: Italy’s Simone Cerasuolo was bronze medallist in the 100m and now he hit the wall first to deliver the first male title for the home nation (and copying compatriot Benedetta Pilato’s victory in this same event among the women). The winner of the 100m, Ukraine’s Volodymyr Lisovets finished third now and shared the bronze with Poland’s Bartosz Skora, while his compatriot Rostyslav Kryzhanivskyy came second.

In freestyle no individual final was held on this day but the semis in the 200m offered some excitements too: another blast from Romania’s David Popovici. He stormed to a 1:45.26 new junior European record, brought down the Championship Record, having held by a certain Yannick Agnel since 2010. This time puts him to the 7th place in the 2021 world ranks and would have earned him the bronze at the senior Europeans Budapest. He has one more job to do in the final: Korea’s Sun Woo Hwang clocked 1:44.96 in May, still a pending junior WR (waiting for FINA’s ratification – that’s why it was announced a new WJR on site), so Popovici may go under 1:45 on Saturday which looks an easy task considering his seemingly effortless swims.

The girls already competed their final on Friday, and it ended in a surprise as favourite Laura Veres from Hungary wasn’t able to repeat her time from the semis, that would have been enough to win. Instead, her compatriot Nikoletta Padar came up with a tremendous finish to pass Britain’s Tamryn Van Selm and claim another title after being part of Hungary’s golden 4x200m relay and the bronze medal winning mixed free quartet. Turkey’s Beril Boecekler could also finish ahead of Veres to clinch her third medal here after her silver in the 800m free and the bronze with the 4x200m free relay.

In the other female final of the session, Justine Delmas of France made no mistake to win the 200m breaststroke with ease (Estonia’s Eneli Jevimova and Russia’s Elena Bogomolova switched positions on the podium, compared to the 50m). As a matter of curiosity, Justine’s twin sister Lucie won a bronze in the 200m fly a day earlier – you barely see twins earning medals at the same swimming meet, competing in so different strokes…

The session-ending relay final offered real thrills as the lead was exchanging constantly, almost at each turn during the boy’s 4x200m free event. Towards the end, Germany seemed to have it, but Russia’s Vladislav Reznichenko had one more fantastic finish in his bag: he had come from behind to secure his team’s win in the 4x100m and did the same now to give a fourth relay title here for his country. Finishing third, the Italians looked a bit nervous for a while but the results were confirmed soon, their takeovers were safe and sound this time so they could march to the victory ceremony, a relief after two lost bronzes due to DSQs over the first three days.

Simone Cerasuolo (ITA), winner of the men’s 50m breast “I am satisfied with the time and the work done, it’s my first European gold. Although I felt tired in the water, I managed to get the medal. Besides swimming, I like spending time with friends and teammates.”

Josif Miladinov (BUL), winner of the men’s 100m fly “I was lucky, I didn’t feel very well in the water. Training is tough but I couldn’t live outside the pool. The organisation of these Championships and this pool are perfect.” Justine Delmas (FRA), winner of the women’s 200m breast “I’m very happy with my result. It’s not my first international medal, though it’s always a pleasure to stand on the podium.”

Aleksei Tkachev (RUS), winner of the men’s 50m back “I expected to win this and I’m happy to have clocked a personal best but I know I can still improve. I’m not going to Tokyo but the Olympics are the biggest dream for everyone. I hope to compete there one day.”

Nikoletta Padar (HUN), winner of the women’s 200m free “I can tell you that this is simply unbelievable! Winning a gold at my first Europeans… Like a fairy tale! I just wanted to travel with the others for 150m then launch a big finish. It worked, I think I surprised everyone, including myself… Looking at the score-board, it was a truly shocking and fantastic feeling!”

Tamryn Van Selm (GBR), runner-up in the women’s 200m free “I feel great and full of energy. It’s the first high-level international competition for me. I’m very happy with how it’s going. In Great Britain, we have a great tradition in freestyle, so I will have to work hard to become part of the future Olympic team.”

Vladislav Reznichenko (RUS), member of the 4x200m free relay “The race was not easy, it was a head-to-head until the end, but we won. The organisation is super, though it was a bit weird for us to compete in an outdoor pool because in Russia we usually swim in indoor ones.”