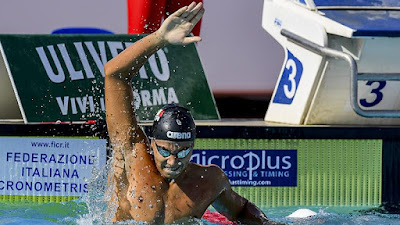 The penultimate day of the European Junior Swimming Championships in Rome brought more individual glory for the brightest stars of the meet. Britain’s Katie Shanahan completed the IM double among the women, Turkey’s Merve Tuncel added the 1500m title to her 800m crown and she also set a new junior ER, Russia’s Daria Klepikova won the 50m fly (had been first in the 100m free) while Romania’s David Popovici came first in the men’s 200m free (ten minutes after qualifying first in the 50m). Spain and Lithuania claimed its first title here and the Russians pulled their 5th relay title.

The light of the setting sun saw the brightest stars of the meet producing more magic in the beautiful Stadio del Nuoto at the Foro Italico. Four very talented youngsters managed to add more gold to their respective medal collections, though they had to go through some challenging moments en route. Daria Klepikova opened the session with a fine win in the 50m fly, the 100m free champion set a new Championship Record (26.14) as she kept Bosnia’s Lana Pudar at bay – a bit later the Russian managed to book her place in the 100m fly final for Sunday too and at the end won another gold with the free relay.

Britain’s Katie Shanahan made the IM double. The battle was tighter perhaps than expected in the 200m but she withheld the pressure coming from Russia’s Anastasia Sorokina who took silver after the bronze in the 400m. Shanahan had 15 minutes to recover and she did just that to clock the second best time in the semis of the 200m back.

David Popovici faced a similar challenge: first he had to speed up for the 50m free, he topped the field of the semis with ease, but in 11 minutes he had his second appearance in the final of the 200m. Though his SF swim was quite promising (new junior ER), this demanding schedule took its toll, and he ‘only’ won with ease but couldn’t repeat his blast from Friday.

Turkey could celebrate another 1-2 after the 800m free – Merve Tuncel was miles ahead again, this time in the 1500m free, she became the first European junior to swim inside 16min. Her 15:55.42 is a new junior European record, and the first achieved in the pool since the previous mark had been still a target time. Compatriot Deniz Ertan finished runner-up, it was her second silver after the 400m IM.

Two finals offered dramatic scenes. In the women’s 50m back Serbia’s Ninja Stanislavjevic seemed to have it, only to be passed by Carmen Weiler Sastre over the last one and a half metres – this was Spain’s first gold (and medal) here. Erika Gaetani came third to add a bronze to her gold from the 100m. (Interestingly, in the very next event, in three minutes, Weiler Sastre and Stanislavjevic had another clash in the middle lanes, in the semis of the 50m free, but neither of them made the cut.) The men’s 200m breast was even more thrilling. Austria’s Luka Mladenovic stunned many by clocking the best time in the semis swimming on lane 8 – in the final he was in front for a while but faded in the last 50m while Russia’s Dmitri Askhabov was about to touch in first. Still, Aleksas Savickas somehow found an extra gear for the last centimetres to out-touch the Russian by 0.02sec at the wall (2:13.35). The Lithuanian won silver in the 100m, got gold here – while Mladenovic left the pool empty-handed, a painful experience for the youngster considering that his time in the semis (2:13.31) would have been enough to win the final too but he has to learn to save the best for the last (clocked 2:13.87)… Russia was a cut above the rest in the women’s 4x100m free, they stand 5 for 6 in the relays. The Brits landed the silver while Hungary was the third – in fact, they were the only ones so far having managed to beat the Russians, in the women’s 4x200m.

Daria Klepikova (RUS), winner of the women’s 50m fly “I worked hard for this victory and I’m very satisfied, it adds to the gold medals won in 100 freestyle and in relays. I felt I could have done even better. Now I’m thinking about next season. I have dreams about my future, but for now I’m focusing on training.”

Katie Shanahan (GBR), winner of the women’s 200m IM “I’m satisfied with my time and with the other races I’ve competed these days. I won three medals. I’m happy to swim in a pool like Stadio del Nuoto: it’s wonderful.”

Anastasiia Sorokina (RUS), runner-up in the women’s 200m IM “It was a tough race, I’m happy with my second place. It’s still an international podium. Sometimes you may finish second, but I don’t mind, I’ll keep training to win. Races like these make me love this sport.”

David Popovici (ROU), winner of the men’s 50m free “I did the best I could but I feel tired. Anyway, I am very satisfied and surprised with the results. I’m looking forward to seeing how the 50m will go tomorrow. The pool is amazing and I love its atmosphere. I really like the climate in Rome and summer is my favourite season.”

Carmen Weiler Sastre (ESP), winner of the women’s 50m back “It’s my first victory and I hope that many more will come. I took part in the European Championships in Kazan two years ago but I couldn’t go beyond the heats. I am very tired because I did two races in a row but I tried to do my best in both. Unfortunately, I did not reach the finals in the 50m free.”

Erika Gaetani (ITA), bronze medallist in the women’s 50m back “I did not expect this medal, five minutes ago I was in the training pool and I had even forgotten this final. 50m is a unique race, you can’t tell in advance who will win. This was the ninth race of these Europeans for me and tomorrow I will have another final. Next year, at European Championships in Rome I will also bring Zeus, my puppy with me.”

Aleksas Savickas (LTU), winner of the men’s 200m breast “After silver in 100 I was expecting this medal, but I didn’t believe in winning. Honestly, I just hoped for it. I know this pool very well, a week ago I also took part at Settecolli.”

Merve Tuncel (TUR), winner of the women’s 1500m free, set new EJR “I am satisfied with my result, it was quite challenging to face the other girls, especially in the first half of the race. Rome is amazing, it’s the first time I compete at Stadio del Nuoto.”

Aleksandra Kurilkina, member of Russia’s winning 4x100m free relay “We are extremely tired, luckily, that’s all for today. We didn’t expect to win even this relay, but we are satisfied. We would like to thank our national team for all the support given to us during the championship, we are proud to be part of it.”