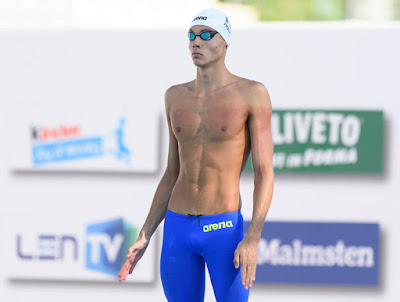 Just like since 2012, Russia topped the medal charts once again at end of the European Junior Swimming Championships in Rome and won the Team Trophy too. As for individual brilliance, Turkey’s Merve Tuncel and Romania’s David Popovici added a third gold to their respective treasuries by completing a hat-trick in the various freestyle events. It was a golden Sunday for Poland, its swimmers delivered four titles, including a historical feat in the men’s 200m fly which saw twin brothers Krzysztof and Michal Chmielewski finishing 1-2, something never seen before.

The brightest stars of the meet, Merve Tuncel and David Popovici completed their mission successfully on the closing day. The Turkish ‘chronometre’ added the 400m crown to the 800m and 1500m wins to complete her treble (though this time no junior ER), while the Romanian Rocket made the sprint sweep by winning the 50m with ease, after a couple of outstanding performances in the 100m and the 200m.

Russia’s Daria Klepikova was 0.51sec away from joining these two but she came ‘only’ second in the women’s 100m fly after having claimed gold in the 100m free and the 50m fly. However, she leaves Rome with the finest medal collection altogether as besides her three individual medals, she had four more golds from the relays to make his total to 7 medals, 6 golds and a silver.

In the 100m fly Bosnian Lana Pudar could finally clinch the title after finishing runner-up in the 50m and 200m. It was a historical first-ever gold medal for Bosnia Hercegovina at a major LEN swimming event. Something similar happened to Eneli Jefimova, the Estonian had a silver from the 200m breast, a bronze from the 50m and now she managed to touch in first in the 100m. Thus she became the one with a full set of medals – Russia’s Elena Bogomilova missed that feat by 0.01sec as she finished runner-up by the tiniest margin to grab her second silver after the 50m (and had a bronze in the 200m).

The men’s 200m fly final kicked off the grand Polish party on Sunday: in a scene never seen before, twin brothers finished 1-2, Krzysztof Chmielewski this time was much faster than Michal (they clocked almost identical times in the heats and the semis), now he won by 0.80sec. Russia’s Vadim Klimenishchev led for a while but then came the brothers’ assault and he finished third.

Next came the finals of the 200m back in both genders, and more celebration for the Polish. The men’s title went to Ksawery Masiuk, another one after the 100m crown (and he was just 0.14sec away from the treble, finished runner-up in the dash). He offered an extremely smart swim, to charge ahead over the last ten metres, finishing off Turkey’s 200m IM champion Berke Saka and Bulgaria’s Kaloyan Levterov.

In the women’s field Laura Bernat withstood the pressure from Britain’s IM queen Katie Shanahan and Italy’s 100m champion Erika Gaetani to land this title for Poland as well.

The 50m free also saw both finals held back-to-back in the final session. Popovici triumphed among the men, as mentioned above, but it’s worth adding that the others produced one of the tightest races ever as the next seven hit the wall in a span of 0.20sec. Israel’s Martin Kartavi grabbed the country’s only medal by 0.02sec, ahead of two tied 4th on 29.94, while the next three also clocked the very same time (23.03). The women’s dash wasn’t as balanced, Russia’s Daria Tatarinova produced not only the lonely sub-25sec effort but she managed to beat the junior ER which was a target time until now. She added this gold to her silver from the 100m and the other three titles earned in the relays.

Germany claimed its first gold in Rome thanks to Cedric Buessing who was a cut above the rest in the men’s 400m IM (he had a bronze from the 200m). Jakub Bursa was a surprise runner-up here, ahead of Russia’s Artem Vorobev.

Besides Tuncel’s triumph among the women, Turkey also dominated the same events (400-800-1500) among the men, though they had three different winners. On Sunday it was Yigit Aslan’s turn in the 800m, who, after coming third in the 1500m, managed to pass the champion of the longest distance Mert Kilavuz. Italy’s Luca di Tullio, who had been the favourite to win all three events, could clinch a bronze after recovering from a bad flu which prevented him from racing over the first four days of the championships.

The Russian girls crowned their outstanding individual performances with a fine medley relay victory, though the French put up a tough challenge, but Klepikova geared up once more in the last leg to give a 6th relay title for Russia here in Rome, the Brits came third. Poland’s golden day was crowned in the men’s medley relay: they staged a great duel over the first three legs with Ukraine but 100m free bronze medallist Mateusz Chowaniec’s 48.79 in the home-coming leg remained unmatched and at the end the Russians also passed the Ukrainians for the silver.

Russia finished atop both in the medal charts and in the Team Trophy – Turkey was second in the medal haunt while Italy finished runner-up in the hunt for the trophy. The Eternal City enjoyed some great swimming in recent weeks, this junior meet followed the traditional Sette Colli – and the magnificent Foro Italico is set to welcome European Aquatics back next August for the European Aquatics Championships while the 2022 edition of the junior continental showcase will be held in Bucharest.

Lana Pudar (BIH), winner of the 100m fly “I am very happy with my result and especially to earn honours to my country. This was the first gold for Bosnia. Where I was born it is difficult to swim professionally, there are no Olympic swimming pools. I love Rome.”

Cedric Buessing (GER), winner of the men’s 400m IM “I am very satisfied with my races especially after the silver in the 4x200m and the bronze in the 200m IM. This gold completes my collection. I really enjoyed the atmosphere in this pool, I hope to come back next year for Europeans.”

Eneli Jefimova (EST), winner of the women’s 100m breast “I am satisfied with this gold, my third medal in these Championships. This is the second international event for me, the first was in May and I have already won several medals. I couldn’t be happier and prouder. It’s my first experience in an outdoor pool, but I have enjoyed it very much. I am leaving soon for the Olympics and I am going to do my best to win a medal and to beat my records.”

Krzysztof Chmielewski (POL), winner of the men’s 200m fly “I don’t know whether I was more excited about the gold or about standing on the podium with my twin brother. Now I’m getting ready for my first Olympics.”

Michal Chmielewski (POL), runner-up in the men’s 200m fly “Winning this medal was exciting. I was hoping for it but I didn’t think I could get a silver. It was a hard fight with my brother. We train together in Warsaw, under Grzegorz Oledzki.” Merve Tuncel (TUR), winner of the women’s 400m free “I am very happy with my results. In the last few months, I have mainly focused on this event. However, the training for Tokyo is going well.”

Giulia Vetrano (ITA), bronze medallist of the women’s 400m free “I lowered my personal best, but I was hoping to go under 4:12. I am happy with the results I claimed this week, it was a good training for Tokyo. This is my last race before the Olympics. I am leaving next week, but first I am going to spend some time with my family and friends, my main supporters. I have just realised that my Olympic dream is coming true.”

Ksawery Masiuk (POL), winner of the men’s 200m back “The results achieved in these Europeans make me speechless! I am leaving for Tokyo; there I will take part in the relay. Of course, I am looking forward to next European Championships. See you next year!”

Laura Bernat (POL), winner of the women’s 200m back “I am satisfied with my result. I have great expectations for the future, I am leaving for Tokyo after a very tough training. I am happy to be in Stadio del Nuoto. I have already been in Rome and it’s a pleasure to be back here.”

Erika Gaetani (ITA), bronze medallist in the women’s 200m back “I know I could have done better, but I feel very tired after six days of racing. I’m not satisfied with the time, I wanted to set a new personal record. I am going to have two days of rest, and then start again with last races of this season.”

David Popovici (ROU), winner of the men’s 50m free “This is my last race before leaving for Tokyo. I had expectations for these Championships, but I have done better than we had thought with my coach. I am determined to take gold in next European Championships here in Rome. I love this sport!”

Daria Tatarinova (RUS), winner of the women’s 50m free “It was very hard but rewarding as well. Russia has an important role in swimming, our athletes often succeed in making international podiums. We work hard, both swimmers and coaches.”

Yigit Aslan (TUR), winner of the men’s 800m free “I really wanted this medal. I have been training for a year to get it. I’m taking part in Olympic Games. This was my last meet in junior category. I would like to come back here for European Championships next year.”

Luca De Tullio (ITA), bronze medallist in the men’s 800m free “I have just come back after few days off due to a health problem. I regret not being able to compete in the previous days, I think I could have got good results. However, I am satisfied with this bronze, even though I have swum two seconds over my personal best, I don’t mind.”