Matsuyma, Hideki: Honoring the Victory, Custom and Culture of the 2021 Masters Champion

Japanese culture places such emphasis on the family, that professional athletes are introduced and recognized by their last name first. It is with that spirit and custom in mind that we extend the warmest of congratulations to the winner of the 85th Masters: Matsuyma, Hideki.

Matsuyma, the first Japanese golfer to win The Masters also earned his first major championship title by finishing the 2021 tourney at 10 under par. Here are but a few insights honoring and related to the 29-year old victor. 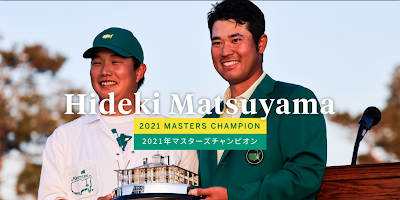 Why Matsuyma won: Moving Day
As many of my readers now know, Moving Day is a colorful way to describe the third day of a tourney—usually Saturday—because it is the day where competitors try to set themselves up for the final push on Sunday.

Golf fans love to dial it in on Moving Day because certain players advance up the leaderboard by leaps and bounds. As written by Golf Digest, "Others collapse under the pressure and slide quickly, knowing that simply by making the cut, they've assured themselves a decent share of the purse." In short, moving day is the day you can confidently move up or you can move back but you cannot lose sight of what that lead score is.

One could argue that a golfer wins a tournament because of how they play 72 holes of golf—but one look at Matsuyma's scorecard from Saturday: a 65 says a lot. With five birdies, one eagle and a bogey free round following his two prior rounds, (which were both under par), Matsuyama created distance between himself and second place. At the awards ceremony, he admitted that his nerves were driving the ball from the first tee on during the Final Round. However, thanks to truly making moves on Moving Day, Augusta National extended a green jacket to a new man.

On Saturday morning, before I headed up to play my own round of golf, an announcer proclaimed—"I don't buy into this Moving Day stuff. Today is like any other day in the tournament." I heard what he said and looked sideways. "That's no fun," I thought. I love the jargon. I love the spirit. And as evidenced though Matsuyama, there IS something to it. 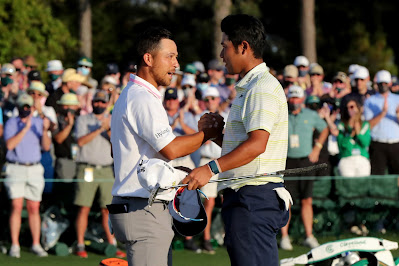 Diversity Has Many Faces
In the sixteen years I taught at Saint Ignatius the school grew increasingly more diverse. It was not the same community it was when I started working there in the Fall of 2003. People too often made assumptions about who comprised that community. Their perception was not reality. S.I. should be very proud of the efforts it made for the student body and faculty to reflect the diversity of the Bay Area–a diversity that has many faces and looks different than what one might expect.

I speak of this truth because I find similar assumptions made about the game of golf. While there is certainly much to question in terms of access, equity, inclusion and the need for diversity, I would like to suggest the face of the PGA and the LPGA is not what you think.

Of those who finished in the top 10 at the 2021 Masters nearly half are international. You have the winner from Japan, two Aussies, one Englishman one Spaniard, and one Canadian. Of the five Americans—one is biracial, another is Samoan/Tongan. There is really only one jerk and one with a waist size 26 on a good day. Again diversity comes in many forms. 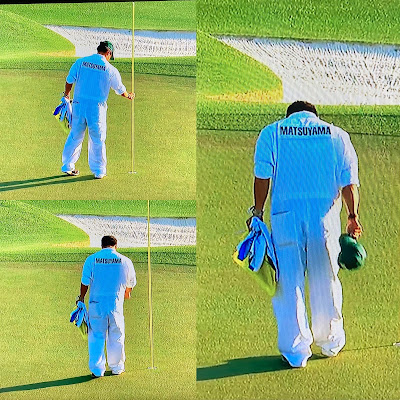 My Favorite Moment
I could not help but appreciate the composure exhibited by the champion as he secured the win and extended thanks and congratulations around him. After a warm embrace, Matsuyama's caddy started to walk the flag back to the 18th hole. But, before he placed the pin in, he took a bow. He bowed to the crowd, to the course and the game of golf.

Having traveled to Japan in 2015 and attending a baseball game in Seibu, I know just a bit about Japanese culture and traditions. They are a people who honor the sacred and show respect with the simplest of gestures: a bow. I don't think I've ever seen a caddy do that before. It was a special moment.

The Champions Dinner 2022
I don't want to make any assumptions but I have a strong suspicion that a lot of golfers are already looking forward to the 2022 Champions Dinner. As mentioned in Big Night: The Champion's Dinner, the previous year's winner sets the menu. Given how many people are mad about sushi….how many of my friends enjoy Saki, or for me—love Kobe steak! that menu is not one they will want to miss.

In Closing
I am always sad when The Masters comes to a close. Given COVID restrictions, none of us had to wait a full year for the 2021 tournament to commence. But, as we progress toward a healthier and reopened society, we live in the hope of what next year will bring.
This Masters brought a limited number of patrons. Though they didn't litter the fairways or fill grandstands, they did what fans ought to do. They cheered loudly, giving away what was happening on another hole before we could get the report from CBS. They stood to clap and acknowledge the great golf by the players in the hunt and most especially to this year's victor: Matsuyama, Hideki.

Thanks to the members of Augusta National for hosting my favorite sports week of the year.

Previous You Can’t Be What You Can’t See: New Perspectives via Golf
Next Sight and Vision: The Green is Sacred Space