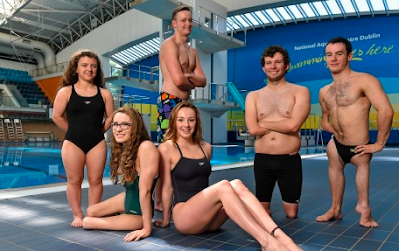 Paralympics Ireland has today named a five person strong Para Swimming Team that will compete at the Tokyo 2020 Paralympic Games next month. The team will include World Championships medallists Ellen Keane and Nicole Turner. Keane will be returning for her 4th Paralympic Games having first represented Ireland at Beijing in 2008.

There are three first time Paralympians included on the squad as Patrick Flanagan, Barry McClements and Róisín Ní Ríain will all make their first appearances at the Paralympic Games. Nicole Turner will be competing at her second games after the young Laois star was given the honour of being the Irish flag bearer at the Rio Games in 2016.

Patrick Flanagan, who grew up in Longford but lives in Sligo, narrowly missed out on a European Championship medal at Dublin 2018 and again in Portugal in May. He will be hoping that he will be able to go one better and reach the podium in Tokyo. Barry McClements is one of the strongest swimmers in the country and has been consistently excellent since he joined the Para Swimming squad post Rio. Róisín Ní Ríain is the new-comer to the squad and will be the youngest member of Team Ireland at the Paralympic Games. The 16 year old from Limerick announced herself on the world stage when she claimed a bronze medal at the recent European Championships on her first appearance at a major championships.

The Para Swim team will now leave for a training camp in Fuerteventura on August 1st before travelling on to Narita City and then transferring into the athlete’s village in Tokyo.

Speaking about the announcement of the Para Swimming Team Chef de Mission, Neasa Russell said ‘It gives me great pleasure to announce the Para Swimming team that will represent us in Tokyo at the Paralympic Games. This is a very strong squad. I am really confident that we will see some memorable performances in Tokyo. I want to wish the squad the very best and I know that they will do us proud in Tokyo.’