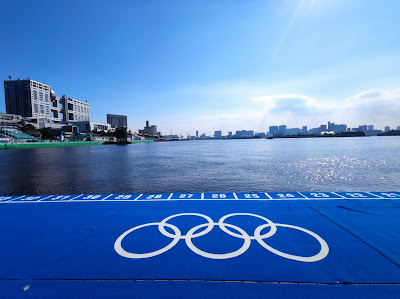 Here you can find a comprehensive and visual Media Guide complete with info on the courses, bios of all the athletes, best results, previous Olympic Triathlon recaps and lots of stats and fun facts about our sport.

Save these dates! We know that our races will be early morning. Really early morning. But if you are in Europe or in America, these times will be just perfect for enjoying one of the best shows in Tokyo! And the best thing about being the early birds? There will be absolutely nothing else going on in Tokyo at the same time as our races, so you really have no excuse not to tune in! 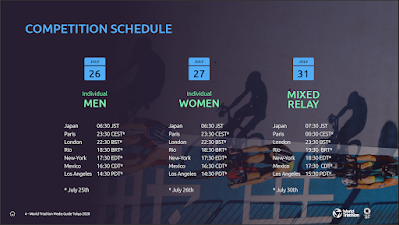 The athlete number and transition position was assigned by a random draw and are grouped together by their National Federation, so unlike a World Triathlon race, these numbers have no relation to the ranking of the athlete.

Mixed Relay start list – Please note that names of the athletes for the Mixed Relay wont be confirmed until 2 hours before the start of the race https://triathlon.org/events/start_list/2020_tokyo_olympic_games/501766?mc_cid=53a1f82f65&mc_eid=6139649918

The Triathlon Mixed Relay format showcases racing at its most thrilling, with the individual sport combining with pure team spirit. After many years as a firm fixture on the World Triathlon calendar with multiple events, the Mixed Relay will make its official Olympic debut in Tokyo 2020.

Four athletes – two male & two female – from the same National Federation will form the teams. Athletes must complete a super-sprint triathlon – 300m swim, 6.8km bike and 2km run – before tagging off to a teammate, always in the order female-male-female-male. Among the most exciting aspects of these races for spectators is the athletes’ dramatic sprint and dive after being tagged by their teammate, as well as the intensity and speed from start to finish, the tight back-and-forth lead changes and team pride that this innovative racing format elicits.

World Triathlon is the international governing body for the Olympic and Paralympic sport of triathlon and all related multisport disciplines around the world, including duathlon, aquathlon, cross triathlon and winter triathlon. Triathlon made its Olympic debut in Sydney 2000, with a third medal event, the Mixed Team Relay, added to the programme at Tokyo 2020, while para triathlon was first added to the Paralympic programme at Rio 2016. World Triathlon is proudly committed to the development of the sport worldwide, with inclusion, equality, sustainability and transparency at our core as we seek to help triathletes at all levels of the sport to be extraordinary.