TOKYO OLYMPICS OPENING CEREMONY A MIX OF EXUBERANCE AND EXCITEMENT 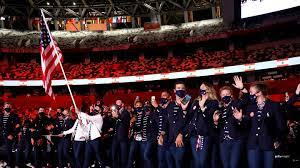 TOKYO – Joy, resilience and face masks color-coordinated with the flags of the world were on display at the Opening Ceremony of the Olympic Games Tokyo 2020.

And there was relief, too, that these Games are actually happening.

Beginning a year late and a tens of thousands of spectators short in the nearly empty new Olympic Stadium, Friday’s ceremony mixed hope for the future with an acknowledgement of the losses of life and opportunities due to the pandemic.

Team USA came roaring in two countries ahead of host country Japan. Although there are 613 athletes in the American delegation, only an estimated 200-plus marched in outfits designed by Ralph Lauren since many have not yet arrived due to COVID-19 restrictions. Others were resting their legs for the long-delayed competition ahead.

“We’re ready,” said Sarah Hirshland, CEO of the U.S. Olympic & Paralympic Committee. “Team USA comes prepared. We will do everything we can to keep our team, our delegation and all of our colleagues and peers both here in Japan and around the world healthy and safe. And may the Games and the competition be as wonderful as we all could anticipate.”

Organizers estimated that about 5,700 athletes from 205 countries and the Refugee Olympic Team marched, with more than 10,000 set to compete at the Games. However, the parade of athletes still lasted exactly two hours.

Basketball player Sue Bird and baseball player Eddy Alvarez, who won a medal at the 2014 Winter Olympics in short track speedskating, were the American flag bearers as First Lady Jill Biden watched from the VIP box.

“I know all the athletes appreciate the support that’s coming from back home, in the form of the First Lady being there with us and everyone watching back home,” said shot put world record holder Ryan Crouser, who also was watching from home since athletes are not allowed to come to the Games until five days before their event starts due to Covid-19 restrictions.

The giant video board did show a montage of well-wishers from around the world.

Although hosting these Games has been controversial, Japan welcomed the world graciously and showcased aspects of its culture including woodworking and kabuki. The hosts also honored the healthcare workers, rescue workers and other essential workers who have contributed so much during the pandemic. They were included both within the ceremony and in the speeches by Seiko Hashimoto, the head of the organizing committee, and IOC president Thomas Bach.

“The world is waiting for you,” Hashimoto told the athletes.

The ceremony creative team utilized the field of play as well as the sky with dazzling fireworks and a fleet of drones that formed the Tokyo 2020 logo in lights and then morphed into a giant Earth.

The main stage represented the sun, the focal point on the Japanese national flag, as well as the country’s famous Mount Fuji.

The $1.4 billion stadium, built on the site of the stadium used for the 1964 Olympic Games, was empty except for about 1,000 dignitaries and hundreds of the world’s press. There were also about 1,400 cast members and about 1,800 staff worked on the ceremony.

While this was a made-for-TV event – with John Legend, Keith Urban and other artists on video singing “Imagine” and a film showing Tokyo highlights – nothing can match seeing the lighting of the Olympic cauldron in person.

The flame entered the stadium to the sound of “Bolero.” Torchbearers included famous Japanese baseball player Sadaharu Oh and a doctor and a nurse. And then out stepped tennis player Naomi Osaka as the final torchbearer.

As stairs appeared on the representation of Mount Fuji, the sun atop opened like a flower “to embody vitality and hope,” according to Tokyo organizers. “It is a divine image that acts as a visual representation of the start of the Tokyo Games.” A second cauldron is in the waterfront area of Tokyo.

The torch relay started its journey on March 25 in Fukushima Prefecture, where the first Olympic softball games were held on Wednesday. This year marks the 10th anniversary of the 2011 Great East Japan Earthquake and the torch relay spotlighted the recovery of the areas most affected by the disaster.

Themes of the nearly four-hour ceremony included “Moving Forward,” “United by Emotion, “For a More Diverse Future,” “Apart But Not Alone,” “Connecting the Dots” and “Hope Lights Our Way.”

As always, the parade of athletes was a highlight. The accompanying music was songs from video games, a quintessential part of Japanese culture, starting with the theme from “Dragon Quest.” The placard bearers wore costumes based on manga.

The athletes came in from one end of the stadium and marched down the middle of the infield instead of taking a lap. Most wore masks, but were not socially distanced.

As the birthplace of the Olympic Games, Greece always leads the way. The other countries followed according to the Japanese alphabet.

For the first time, the next two host countries – Team USA and France – were given the honor of marching in at the end of the procession before the host.

Also for the first time, most teams had both male and female flag bearers, sending a message of gender equity.

Sometimes the two flag bearers looked awkward while waving their flag, but the extra pair of hands was convenient when one flag bearer wanted to take a selfie. The flag bearers from the Dominican Republic showed off some dance moves, as did the ones from Portugal. The entire delegation from Argentina bounced up and down as they progressed across the field.

And yes, the Tonga male flag bearer was well-oiled.

Emperor Naruhito declared the Games open, followed by more fireworks and a symbolic release of doves that flew through the air like paper airplanes.

After doves released at the Seoul Olympics in 1988 were apparently incinerated in the cauldron lighting, the IOC has forbidden the use of live birds.

Another crowd pleaser was a tribute to sport pictograms, which were introduced at the Tokyo 1964 Games. Actors simulated the 50 pictograms to be used for the 2020 Games.

Hours before the Opening Ceremony, Musselman said that her team has “always done a really good job of creating our own energy within our circle, and to be able to do that in a space where there’s usually people surrounding you. I don’t see that being a problem for us to be able to create that Olympic spirit and that Olympic vibe within our team. And something we’ve always done is come together at opening ceremonies, and I look forward to that.”

In another press conference Friday, Susanne Lyons, chair of the USOPC board, said she was “amazed and relieved that we find ourselves here today.”

“We recognized how very, very difficult this has been,” Lyons said, “and we come here humbly and with respect for our Japanese hosts. We will follow every protocol, we will follow every rule to make sure this is a safe and secure Olympics for everyone.”