Passing under the archway of chips for sale and on display at Safeway, I realized pandemic or not Super Bowl Sunday is upon us. Second to the Thanksgiving holiday, Americans eat more on this near national holiday than any other day of the year. I paid heed to the purchase power of those in front of me as I waited in line: cut veggies, dogs and buns, more chips, lots of dip. A royal hodgepodge of healthy and not so healthy, processed, colorful and caloric and figured why not create my own. Here are a few thoughts for you to snack on before—err…after Super Bowl LV. Enjoy 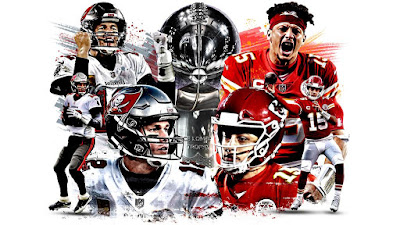 In lieu of "The Why"I don't myself as a skeptical or jaded person. However, the sophomore in me remains strong. And what I mean by that is when an idea or a tag line has run its course, it needs to be retired. If it's not, it becomes cliche. Even the definition of cliche seems to now be cliche. In other words, it loses its meaning. Said cliche can come out of retirement in due time, but let it lay low for a while. There's enough creativity in the human race that we can and should find new ways to express the same truth.

In coaching, the hot term in recent years has been "The Why." I have given talks on this very topic. Asking an athlete why he or she plays and competes is an important question. Asking a coach why they do what they do is a telling question. "The Why" invites reflection. It is on-going consideration and invitation. But can we press pause for a minute? 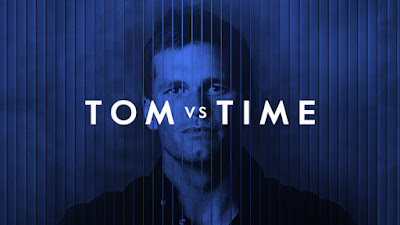 In short, let's move beyond "The Why" and consider "Where is your conviction?"

The Kid
I love a good nickname. However, when you have a name as cool sounding as "Mahomes," I'm not sure you need one. But the KC QB has a few. For example, my Dad calls him "Boy Wonder" and he is more commonly known as "The Kid." I found both to be quite fitting. At just 25 years of age, Patrick Mahomes led his team to his second straight Super Bowl.
You need not enter a sports bar to engage sports fans in a debate about the G.O.A.T. It's on-going, it's everywhere. You probably can't go a day without hearing some sport claiming their greatest of all time—their G.O.A.T. And one person is associated with that nickname in football more than any other: Tom Brady. 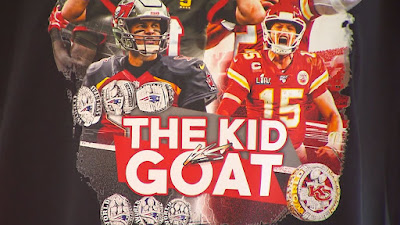 With the selling point of this year's Super Bowl contest being a Brady v. Mahomes showdown, the GOAT v. the Kid raged on. After hearing nearly a week of this sports talk, a light went on. I realized something that must be obvious to most people but me: Patrick Mahomes is the Baby G.O.A.T. and in the English language we refer to them as "kids." It was if the clouds had lifted…the scales dropped from my eyes. I love connecting the dots. I should have known why he is called the kid. I love it.

Dots lead to more dots. I learned from Redwood Hill Farms that "It wasn’t until the 1800’s that the word kid was extended to children." I hope it's still PC to call young humans kids. Let me know if not.

Who You Did Not See Play on Super Bowl Sunday
One of the great joys of teaching Ethics and Sports and Spirituality is the opportunity to "introduce" inspirational people with my students. On Friday before the Super Bowl I was able to share the story of Laurent Duverney-Tardif, by way of his profile as a Sports Illustrated Sportsperson of the Year. 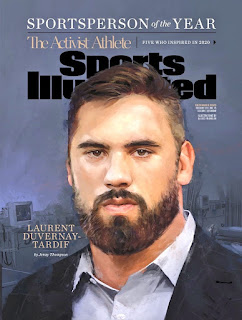 The Kansas City Chiefs offensive lineman, who spent the first four years of his NFL career balancing football with medical school, opted out of the 2020 football season. He passed up the chance to defend his team's Super Bowl title by joining the frontlines of the healthcare system in its fight against COVID-19 in Canada.
I asked my students to respond to the video with their impressions and insights. I am always amazed at what strikes them…and I'm grateful that at least one student "kept it real" by asking how much he can squat. Well played. I want to know too.

Kudos to ESPN Daily for re-airing their profile on this remarkable doctor, athlete and humanitarian!

In Closing
The Super Bowl is now a week behind us. In episode 12 of my podcast: FaithFondue, Haley and I discussed the number of February holidays. A number of Americans want the Monday after the Super Bowl to be a national holiday. There are however a hodgepodge of others to enjoy this month—a month during which we celebrate Black history, our Presidents, groundhogs, our most popular sport, love and feasting before the fast. Enjoy it all.