zekal3_3 2021-02-27 Fashion, Life & Love Comments Off on An Intelligence Gathering “Ghost Plane” That Does Not Officially Exist Was Spotted In Somalia 50 Views 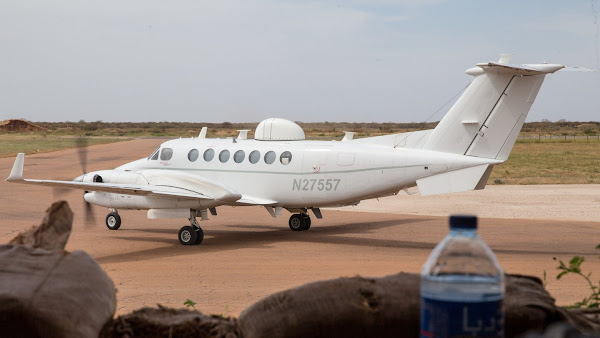 Warzone/The Drive: Photo Emerges Of Shadowy Intelligence Gathering "Ghost Plane" In Somalia
The modified Beechcraft King Air has a unique configuration and doesn't officially exist or belong to any real operator.
For years, there has been very limited information available publicly about U.S. counter-terrorism operations in Somalia and the forces, based there and in neighboring countries, carrying them out. The repositioning of the bulk of American military forces out of this East African nation between December 2020 and January 2021, dubbed Operation Octave Quartz, highlighted those activities in a way that had not been previously seen. This has included the release of a significant number of what would have been previously been very rare pictures and video clips of U.S. personnel operating in and around the country. One picture that was recently released, seen at the top of this story, prominently shows what can be considered a "ghost aircraft."
Read more ….
WNU Editor: In one of his final acts as President, Trump ordered the withdrawal of US forces from Somalia …. Trump orders a near total withdrawal of US troops from Somalia (CNN). The appearance of this intelligence aircraft confirms (to me) that President Biden is listening to these "experts" …. Trump’s Withdrawal From Somalia Is a Security Threat. Biden Should Reverse It. (Foreign Policy)Original Article