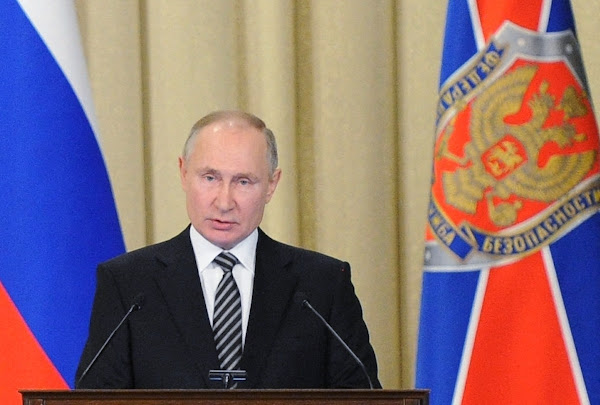 Russian President Vladimir Putin during a meeting of the Federal Security Service Board in Moscow on February 24. Photo: AFP / Alexei Druzhinin / Sputnik
Pepe Escobar, Asia Times: Putin, crusaders and barbarians
Civilized NATO might want to rethink picking a fight with the lateral heirs of the Great Khan
Moscow is painfully aware that the US/NATO “strategy” of containment of Russia is already reaching fever pitch. Again. This past Wednesday, at a very important meeting with the Federal Security Service board, President Putin laid it all out in stark terms:
We are up against the so-called policy of containing Russia. This is not about competition, which is a natural thing for international relations. This is about a consistent and quite aggressive policy aimed at disrupting our development, slowing it down, creating problems along the outer perimeter, triggering domestic instability, undermining the values that unite Russian society, and ultimately to weaken Russia and put it under external control, just the way we are witnessing it transpire in some countries in the post-Soviet space.
Read more ….
WNU Editor: If you want to understand why it is not a good idea for anyone to pick a fight with Russia, the above commentary and analysis gives you the reason why.Original Article