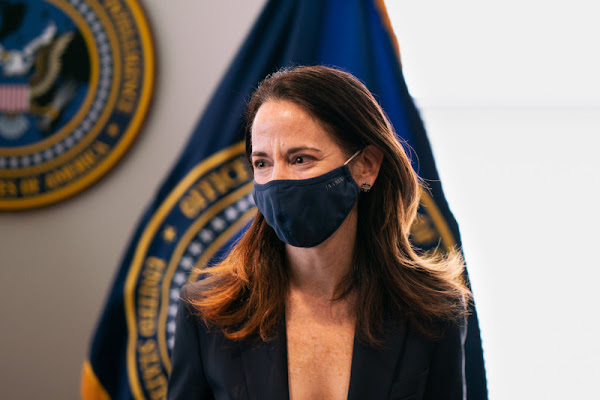 Avril Haines, the new director of national intelligence, released a declassified report Friday that says Saudi Arabia's crown prince was responsible for a 2018 killing of a prominent journalist. Haines spoke to NPR in her first interview since taking office last month. Claire Harbage/NPR
NPR: Avril Haines Takes Over As Intelligence Chief At 'A Challenging Time'
As the top U.S. intelligence official for just over a month, Avril Haines has an overflowing inbox.
A massive computer hack blamed on Russia is still under investigation. President Biden has raised the possibility of rejoining a nuclear agreement with Iran. And right before Haines sat down Friday with a team from NPR, for her first interview in office, aides handed out a report she'd just declassified: it said Saudi Arabia's crown prince was responsible for the brutal 2018 killing of journalist Jamal Khashoggi.
Haines has taken over after a turbulent time. Former President Donald Trump was frequently at odds with his handpicked national security team when its assessments did not fit his preferred narrative. During his one-term presidency, he had five directors of national intelligence.
Read more ….
WNU Editor: She is making her presence felt. The release of the report implicating Saudi Arabia's crown prince as being the person responsible for the 2018 killing of journalist Jamal Khashoggi. The bombing of an Iranian-backed militia in Syria a few days ago. Assessing the national security situation when it comes to China and Russia.
For more details on Director of National Intelligence (DNI) Avril D. Haines, go here …. Who’s Who in Defense: Avril D. Haines, Director of National Intelligence (Breaking Defense).Original Article