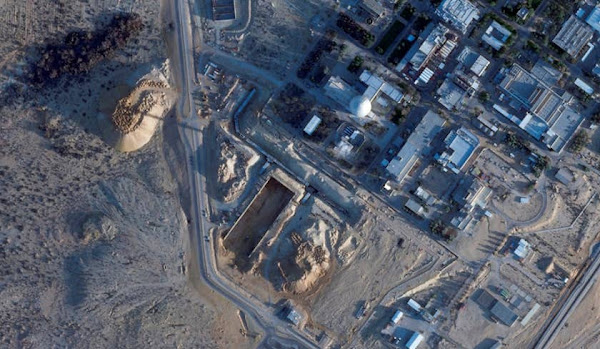 A satellite photo from Planet Labs Inc. shows construction at the Shimon Peres Negev Nuclear Research Center near the city of Dimona, Monday. Credit: AP
Haaretz: Trump Administration Order Allowed Release of High-resolution Satellite Imagery of Israeli Nuclear Facility
A change to resolution limits of satellite imagery of Israel and the Palestinian territories, under a 1997 regulation enacted to protect Israel's security interests, means more images of Israeli sites may be expected soon.
High-resolution satellite imagery showing construction of a new compound at Israel’s nuclear reactor in Dimona published on Thursday was released by virtue a U.S. administrative order that went into effect in July during Former President Donald Trump's tenure and which allowed American companies to sell much clearer and higher resolution images of Israel and the Palestinian territories than they could before.
A 1997 U.S. regulation, known as the Kyl-Bingaman Amendment, named for the two senators who sponsored it, limits commercial satellite imaging systems licensed by the federal government to providing imagery of Israel that is “no more detailed or precise than satellite imagery of Israel that is available from commercial sources.” Intended to protect Israel’s security facilities, the Kyl-Bingaman Amendment applies specifically to Israel alone and is the reason why for years, satellite maps of Israel in Google Earth had been much lower than in most other countries.
Read more ….
Update: Trump-Era Order Made Capturing Detailed Satellite Photos of Israel's New Nuclear Facility Possible (Sputnik)
WNU Editor: Mu gut tells me that the Israeli government is pushing the Biden administration to reinstate resolution limits of satellite imagery of Israel and the Palestinian territories for security reasons.Original Article