How Bad Were U.S. – Canada Relations Under President Trump? 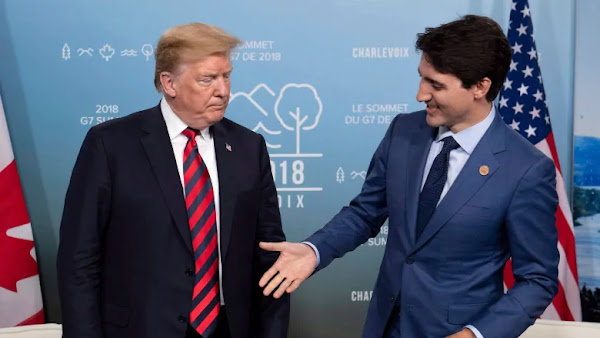 Prime Minister Justin Trudeau goes to shake hands with U.S. President Donald Trump during a meeting at the G7 leaders summit in La Malbaie, Que., June 8, 2018. Despite an often-tense relationship between Canada and the United States during Trump's presidency, deals were forged on bilateral issues. (Justin Tang/The Canadian Press)
Mark Gollom, CBC News: Trudeau says Canada-U.S. relations need to rebuild. Just how bad did it get with Trump?
Relationship shouldn't just be judged by Trump's actions, says former ambassador
When Justin Trudeau met virtually with U.S. President Joe Biden this week, the prime minister suggested that relations between the two countries had taken a significant hit during Donald Trump's administration, noting that "there's a lot to rebuild."
Tensions over trade culminated in tariff battles during Trump's term in the White House, and his use of Twitter to blast the prime minister certainly put a chill on their relationship.
However, despite the often-tense relationship between Trudeau and Trump, tough deals were still forged, including a revamped NAFTA agreement, while the countries continued to co-operate on longstanding issues.
Read more ….
WNU Editor: There may have been a number of personal and ideological differences between President Trump and PM Trudeau. But they still accomplished a lot. A modernized NAFTA agreement is on the top of my list for accomplishments.Original Article