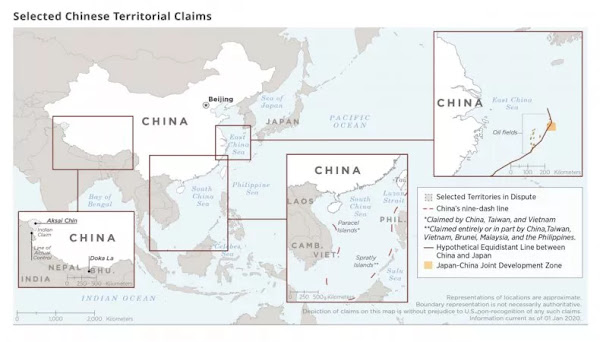 A map published by the U.S. Department of Defense shows several territorial disputes involving China, as of January 1, 2020. U.S. DEPARTMENT OF DEFENSE
Newsweek: China Military Vows to 'Not Lose A Single Inch' of Ancestors' Lands in Asia
China's armed forces have vowed not to cede any ancestral lands, nor annex any new ones, amid the protracted territorial disputes pitting powers against one another in Asia.
"We cannot lose a single inch of the lands we inherited from our ancestors," the Chinese Defense Ministry's Information Bureau said in a statement published Monday in response to a question on China's national defense strategy, "and we would not take a single cent of others' possessions."
The remarks echoed comments earlier made by Chinese President Xi Jinping to then-Defense Secretary James Mattis during a June 2018 visit to Beijing. Tensions have since worsened between the world's two largest economies, expanding the rift in their rival geopolitical views in areas such as Taiwan and the East and South China Seas.
Read more ….
WNU Editor: These remarks by China always raises alarm bells with all of its neighbors. And as to what are China's "ancestors lands"? The above US Department of Defense map gives a good indication, but what is omitted are China's claims on major parts of Russia's Siberia, Mongolia, and the central Asian countries of Kazakhstan, Kyrzystan, and Tajikistan.
Update: The Chinese are backing this vow with major exercises …. South China Sea: Beijing embarks on month of military drills as fears of all-out war rise (Daily Express).Original Article