zekal3_3 2021-03-10 Fashion, Life & Love Comments Off on US Vice President Kamala Harris Has Another Call With A World Leader Without President Biden 35 Views 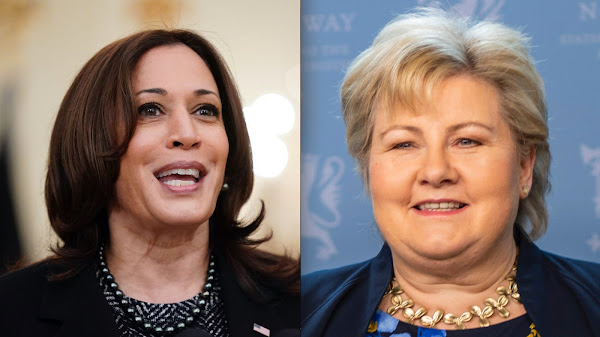 Kamala Harris og Erna Solberg. Foto: Patrick Semansky / AP og Heiko Junge – begge via NTB.
FOX News: VP Kamala Harris takes another solo call with a world leader
Harris spoke with the prime minister of Norway, Erna Solberg
Vice President Kamala Harris had another call with a foreign leader Tuesday, independent of President Biden. Harris spoke with the prime minister of Norway, Erna Solberg, where Harris "affirmed her commitment to deepening the strong alliance between Norway and the United States."
"The Vice President thanked the Prime Minister for Norway’s close security partnership with the United States and generous contributions to development and health security efforts around the world," according to a readout of the call.
Read more ….
Update: Readout of Vice President Kamala Harris Call with Prime Minister Erna Solberg of Norway (White House)
WNU Editor: There is an international protocol when world leaders talk to each other. Basically it comes down to one leader talking to another leader. The second in command or lower official does not talk to the leader of another nation. This new "White House" arrangement sends a message to the world that there are two leaders in the White House, not one.Original Article