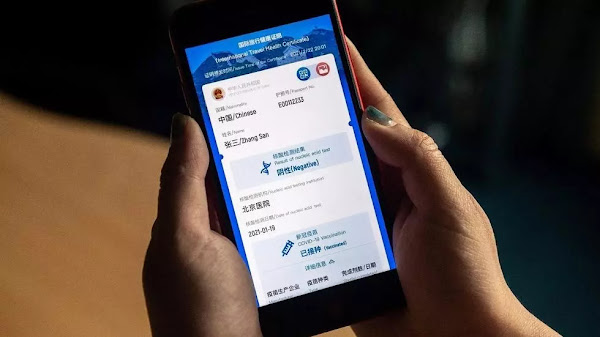 A phone displaying a mock-up of China’s new digital health certificate, a "virus passport" concept, which shows a user's vaccination status and virus test results, in an illustration photo taken in Beijing on March 9, 2021. © Nicolas Asfouri, AFP
Global Times: China to support WHO on setting up vaccination mutual recognition platform
The World Health Organization (WHO) on Monday once again expressed practical and ethical concerns over using a vaccination passport as a certificate for international travel, while China on the same day launched its version of a health code for people who travel abroad.
Chinese experts noted on Tuesday that China can help by sharing its experience with and provide technical support to the WHO to organize the issue, as China is the most experienced country in using a health code system in the world while the WHO is the most proper organizer for the matter to ensure independence, fairness and data security.
Read more ….
Update #1: China-WHO cooperation suggested in global health passport (Prensa Latina) Update #2: China Urges W.H.O. to Let It Run Global ‘Vaccine Passport’ System (Breitbart)
WNU Editor: China is well positioned to help set up and run such a system. After-all. They are the first to have a vaccine passport program …. China introduces world's first 'virus passport' programme (France 24).Original Article

Previous Growing Concerns That Brazil’s P1 Variant Threatens To Drag Out The Pandemic Worldwide
Next U.S. And Chinese Top Diplomats To Meet For Talks In Alaska Next Week (Update)