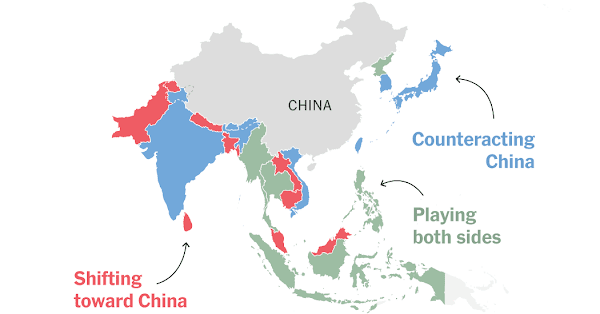 New York Times
Defense One: The Pentagon Can’t Spend China Into Submission, But Alliances Can Deter It, House Dems Say
The second hearing in as many days for the INDOPACOM commander turns toward alliance-building.
It’s a pipe dream to think the U.S. military will ultimately cow China, but a network of alliances might do the job, Democratic lawmakers said Wednesday.
“The idea that we can build a military large enough and strong enough to dominate China in the modern world is not realistic and is fraught with danger,” said Chairman of the House Armed Services Committee Rep. Adam Smith, D-Wash. “So I hope we can better understand how to make proper investments.”
Read more ….
WNU Editor: These Democrat lawmakers may not want to spend the money to boost the U.S. military to face China, but China is more than determined to spend what is necessary on their military to force the U.S. to submit to what they want.
And as for establishing a network of alliances to deter China.
For as long as I can remember America's allies in Asia have been talking with Washington to form such a defense bloc. But it has never gone forward because America's allies have always been reluctant to spend what is necessary to deter China. The expectation has always been that the U.S. will foot the bill for their defense …. an expense that these US lawmakers have made very clear is not on the table.Original Article

Previous U.S. And Chinese Top Diplomats To Meet For Talks In Alaska Next Week (Update)
Next Tweets Of The Day