Has Special Forces Become A Major Player And Substitute For U.S. Strategic Thinking? 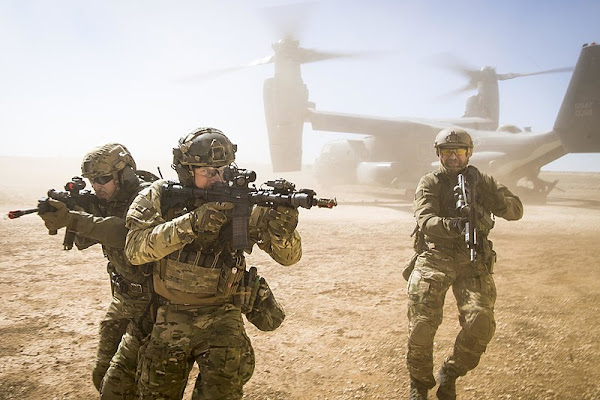 A joint special forces team moves together out of an Air Force CV-22 Osprey aircraft, Feb. 26, 2018, at Melrose Training Range, N.M., during Emerald Warrior, the largest joint and combined special operations exercise. Wikimedia
Mark Bowden, The Atlantic: American Special Ops Forces Are Everywhere
They’ve become a major military player—and maybe a substitute for strategic thinking.
Within the span of a few decades, the United States has utterly transformed its military, or at least the military that is actively fighting. This has taken place with little fanfare and little public scrutiny. But without any conscious plan, I have seen some of the evolution firsthand. One of my early books, Black Hawk Down, was about a disastrous U.S. Special Ops mission in Somalia. Another, Guests of the Ayatollah, about the Iran hostage crisis, detailed an abortive but pivotal Special Ops rescue mission. U.S. Special Operators were involved in the successful hunt for the drug lord Pablo Escobar, the subject of Killing Pablo, and they conducted the raid that ended the career of Osama bin Laden, the subject of The Finish. By seeking out dramatic military missions, I have chronicled the movement of Special Ops from the wings to center stage.
Read more ….
WNU Editor: Special Forces have become a major player in U.S. foreign and military policy. IMHO there is no question about that. But is US strategic thinking now dependent on the availability of Special Forces assets? I would say that it depends on the issue and the country that is involved.Original Article