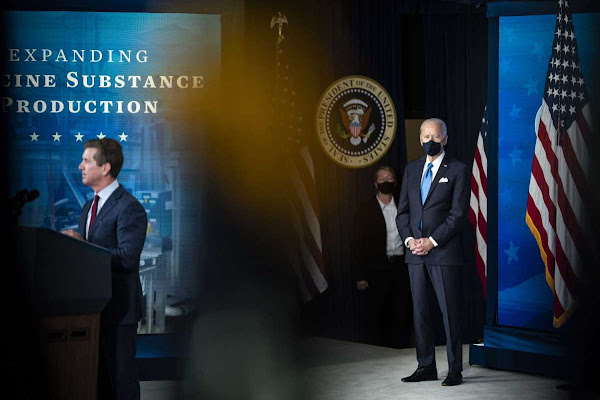 President Joe Biden listens Wednesday as leaders from Johnson & Johnson and Merck spoke during an event at the White House.Washington Post photo by Jabin Botsford
Washington Post/SFGate: Biden vaccine victories build on Trump team's work
WASHINGTON – President Joe Biden beckoned leaders of two of the world's largest pharmaceutical companies to the White House on Wednesday and credited his administration for the "nearly unprecedented collaboration" between the longtime rivals, Merck and Johnson & Johnson, now jointly producing acoronavirus vaccine.
But the breakthrough touted by Biden was first conceived by Trump officials last year, culminating in a Jan. 4 conference call arranged between Merck and Johnson & Johnson's senior leaders, said four Trump administration officials with knowledge of the efforts.
Read more ….
Update: Even the New York Times gives Trump credit for getting vaccine production going' – as he boasts 'I hope everyone remembers when they get their beautiful shot' (Daily Mail)
WNU Editor: The Biden administration's narrative on the vaccine is different, and the news media (much to my surprise) are reporting how false it is …. Biden fact check: White House claimed the U.S. vaccinated record 2.9m on Saturday (it was 1.56m) and exaggerated share of older Americans who've been fully immunized (Daily Mail).
One more thought.
I recall former President Trump in September being pilloried by the press and the Biden campaign that his claims of a vaccine being administered by November/December were false and a blatant act of electioneering. That any vaccine being developed and administered was still far in the future.
A few days after the US Presidential election, we learned who was right …. BREAKING NEWS!!! Pfizer, BioNTech Say Their Covid Vaccine Is More Than 90% Effective. Stock Market Indexes Explode (November 9, 2020).Original Article