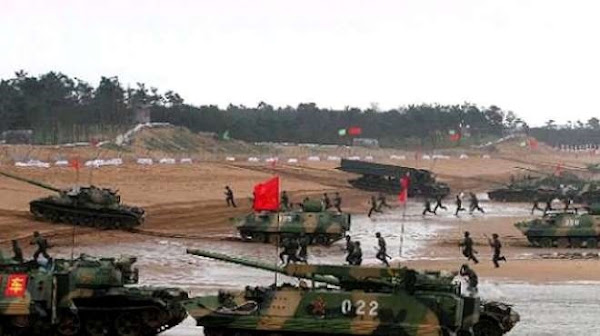 PLA troops practice amphibious landing. PLA Eastern Theater command
Radio Free Asia: China's Xi Jinping Tells People's Liberation Army to Get Ready For Combat
Xi's administration wants to achieve its goal of invading Taiwan, which it has never ruled, sooner rather than later. Ruling Chinese Communist Party (CCP) leader Xi Jinping has told the country's military and armed police force to get 'combat ready' to defend national sovereignty and security, amid fears that Beijing may be planning an invasion of democratic Taiwan in the next few years.
"The entire army needs to strengthen its performance so as to do a good job of ensuring a good start to the 14th Five-Year Plan, and of celebrating the 100th anniversary of the founding of the party," Xi told People's Liberation Army (PLA) and People's Armed Police (PAP) leaders, according to a Mar. 10 report in the official CCP newspaper, the People’s Daily.
Read more ….
Update: Xi planning to annex Taiwan in 5 years: Chinese scholar (Taiwan News)
WNU Editor: All media is controlled in China. Beijing wanted this story to be published and to be picked-up by everyone. Beijing is no longer hiding their intentions and goals.Original Article

Previous http://feedproxy.google.com/~r/WarNewsUpdates/~3/1_XUz8Iygzo/bloomberg-xi-jinping-warns-against-tech.html
Next US-China Summit In Alaska Will Take Up Explosive Taiwan Issue