Is The Ukraine War About To Escalate? 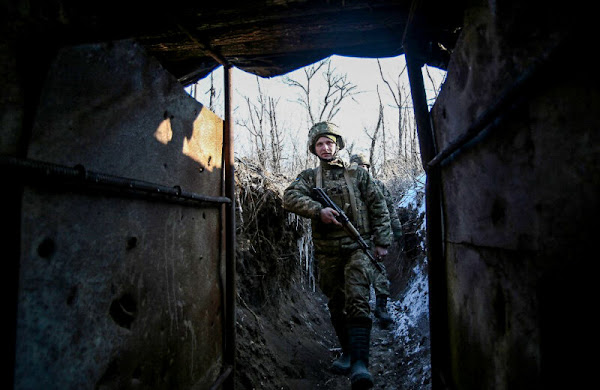 Ukrainian soldiers enter a dugout on the front line of Russia's war against Ukraine in Donetsk Oblast on Feb. 16, 2021. Photo by AFP
Ukinform: OSCE recorded 174 ceasefire violations in Donbas over past weekend
The OSCE Special Monitoring Mission to Ukraine (SMM) recorded 143 ceasefire violations in Donetsk region and 31 in Luhansk region between the evenings of 12 and 14 March.
The OSCE SMM said this in a report issued on 15 March, based on information from the monitoring teams received as of 19:30 on 14 March 2021, an Ukrinform correspondent reports.
“In Donetsk region, between the evenings of 12 and 14 March, the SMM recorded 143 ceasefire violations, including 33 explosions (one airburst, two impacts and 30 undetermined),” the report reads.
Read more ….
WNU Editor: Casualties are happening every week …. Ukrainian soldier killed as Russia’s war in Donbas escalates (Kyiv Post). And the economic costs in the eastern part of Ukraine have been terrible …. Frozen conflict brings economic stagnation to Ukraine’s Donbas region (Emerging Europe).
In the past few weeks I have been hearing from both sides that a military build-up has been underway. Both sides are also telling me that border skirmishes and shelling has increased in the past month. I also know that talks between the two sides are not even happening.
Bottom line.
I can easily see a resumption of heavy fighting in the next two or three months.Original Article

Previous US vs. China Military Activities In The Indo-Pacific Region (2019 vs. 2020)
Next Russian Opposition Leader Navalny Says He’s Detained In A ‘Concentration Camp’