Will NORAD Be Modernized? 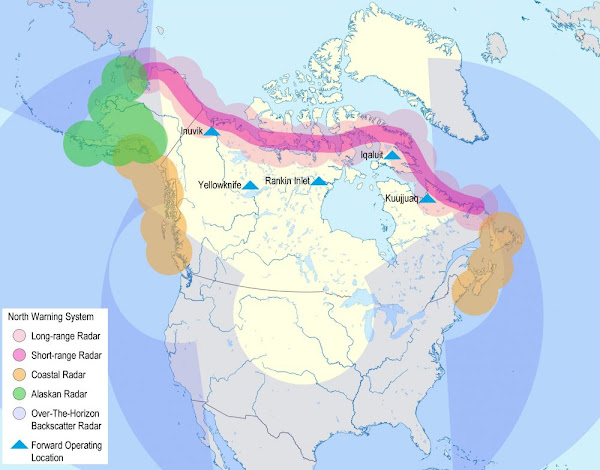 This map shows the extent of the North Warning System of radar stations as envisioned by Canada and the United States in 1987. When NORAD is modernized, it’s possible these radar stations may be moved further north. (Map courtesy of Department of National Defence)
CBC: The golden silence over NORAD renewal and the voices who want to shatter it
The old proverb "silence is golden" is pretty much the best way to describe the unwritten rule within the halls of power in Ottawa regarding NORAD, the North American Aerospace Defence Command.
The Liberal government has been largely silent on the matter.
The defence policy, four years ago, made passing reference to the anticipated multibillion dollar modernization of the North Warning System, the backbone of NORAD. After that, silence.
Read more ….
WNU Editor: Prime Minister Justin Trudeau and U.S. President Joe Biden made a commitment to the modernization of NORAD and its chain of 47 radar stations running from Labrador to Alaska after they held a virtual meeting on Feb. 23. These radar stations are now obsolete and their lifespan ends in 2025. The cost to modernize NORAD will be approximately $11 billion, and while Trudeau and Biden have committed to modernizing NORAD, it remains unclear when this will happen.
They better commit the funds to this modernization project quickly. There is a lot of action happening on the border …. US general says NORAD responded to more Russian military flights near Alaska last year than any year since the Cold War (Business Insider).Original Article