Russian Navy Tracking Two US Warships In The Black Sea 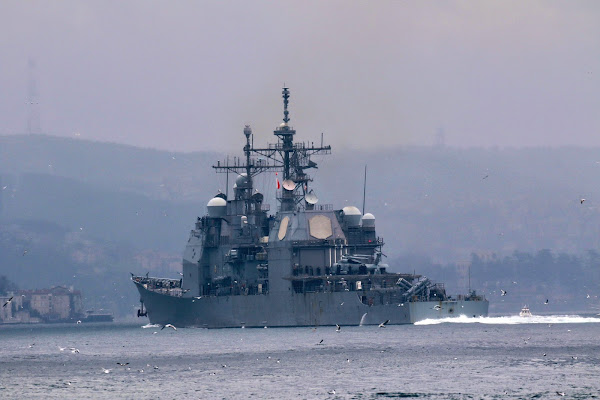 USS Monterey transited Bosphorus towards the Black Sea on March 19, 2021. Photo by Yörük Işık‏ used with permission
Sputnik: Russian Navy Tracking Two US Warships in Black Sea
The deployment of American naval assets in the Black Sea is limited by the Montreux Convention of 1936, which restricts the stay of warships from non-Black Sea-adjacent states to 21 days. Additionally, no more than nine foreign warships weighing a total of 30,000 tonnes are allowed be present in the body of water at any one time.
The USS Thomas Hudner, an Arleigh Burke-class guided-missile destroyer, began its transit through the Turkish Straits into the Black Sea on Saturday to join the USS Monterey, a Ticonderoga-class guided missile cruiser, which arrived in the area a day earlier, the US 6th Fleet has reported.
Read more ….
WNU editor: Here is one of the US warships …. Cruiser USS Monterey Enters Black Sea for ‘Multi-Domain’ Operations (USNO News).Original Article