A ‘Mega Container Ship’ Has Run Aground, Blocking Egypt’s Suez Canal In Both Directions

zekal3_3 2021-03-24 Fashion, Life & Love Comments Off on A ‘Mega Container Ship’ Has Run Aground, Blocking Egypt’s Suez Canal In Both Directions 35 Views 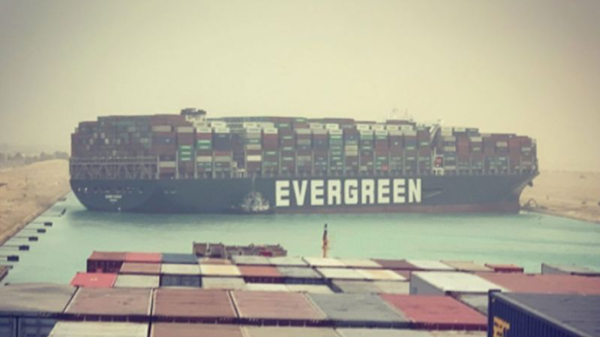 The Ever Given (owned by the company Evergreen) is jammed in the Suez Canal. (Instagram)
9News: Jammed container ship causes enormously costly traffic jam in Suez Canal
A massive container vessel has become wedged in the Suez canal, blocking traffic on one of the world's most important waterways.
The Ever Given, a 400-metre long cargo ship en route from China to Rotterdam, has become stuck one of the narrowest parts of the canal. Tugboats are desperately trying to shift the massive vessel as a massive backlog of ships accumulates at the mouth of the Red Sea, and the Great Bitter Lake.
Read more ….
WNU Editor: The container ship Ever Given is a nearly 200-foot-wide, 1,300-foot-long, 400,000 ton cargo ship sailing under a Panamanian flag.
More News On A Massive Container Ship Blocking The Suez Canal