What Economic Measures To Expect Next From The Biden Administration

zekal3_3 2021-03-29 Fashion, Life & Love Comments Off on What Economic Measures To Expect Next From The Biden Administration 36 Views 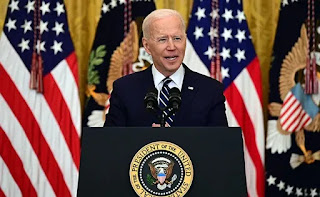 WNU Editor: Someone in the White House gave their roadmap on what to expect next to this AP reporter …. Path from Clinton to Biden takes U-turn on debt, trade, more (Josh Boak, AP).
Summarizing the AP report, this is what we should expect ….
…. When Bill Clinton spoke of how to build a bridge to the 21st century, it was to be constructed with balanced budgets, welfare recipients who found jobs and expanded global trade.
Three decades later, President Joe Biden is dealing with harsh 21st century realities and his approach has been the exact opposite: Borrow to spur growth, offer government aid without mandating work and bring global supply chains back to the United States.
This change in Democratic policy reflects the unique crises caused by the pandemic, as well as decades-old trends such as the rise of economic inequality, the downward slope of interest rates that made borrowing easier and globalization’s pitfalls as factories departed the Midwest. White House aides are comparing the scope of Biden’s policy ambitions to Franklin Delano Roosevelt’s after the Great Depression.
The part on comparing the scope of Biden’s policy ambitions to Franklin Delano Roosevelt’s after the Great Depression made me chuckle. President Biden is not President Roosevelt.
And as for what the Biden administration wants to accomplish while they have control of the Congress. I have seen this playbook many times before in many places, and here is my prediction.
President Biden's stimulus program will probably cut poverty by about 40% this year. With this amount of "helicopter money" being dumped how can you not decrease poverty and/or give the illusion that poverty is being alleviated.
But next year, when all of this money has been spent, we will then be seeing the following. High inflation, poverty levels surging, economic growth stalled and/or worse, and deficits exploding to unsustainable levels (as if they are not there already).Original Article

Previous Are We Now Seeing The Market Sell-Off That Many Have Been Predicting For The Past Few Months?
Next Taiwan Builds Up Its Military Presence On South China Sea Island That It Controls